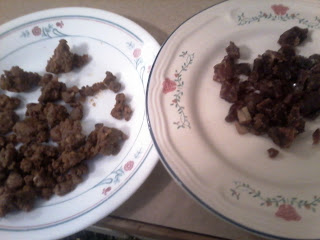 Earlier this week I was relaxing in the bath when I heard a ruckus between Brady and his Step-dad. My curiosity was satisfied when the boy hollered through the door, "He's trying to make me eat all the dates!"

To which Jason replied, "They are not dates. It's taco meat!"

Now this seems like a really odd discussion, doesn't it?

Turns out, I had given Brady dates earlier in the evening, he tried a few, and then I put the rest away. Apparently he didn't see me do this, so when I gave him his dinner - including a bowl of taco meat - right before I went to hop in a quick relaxing bath, he was just certain it was the rest of the dates.

Jason knew this wasn't true, tried to convince him, but he was just so SURE of it.

I said, "Kid, I put the dates back in the box and gave you taco meat with dinner."

To his credit, he immediately apologized, then ate the taco meat and said, "Wow, this is really good!"

Life sure is interesting around here. And to Jason's credit, he immediately put taco meat and dates side by side and told Brady that, yes, indeed, they did look alike.

Blending a family is always challenging, and I have prayed a lot for the two of them to learn to understand each other. It looks now like they have at the very least learned how to work out their differences  :) Thank you, God.
Posted by Burbs to Boonies at 11:48 AM