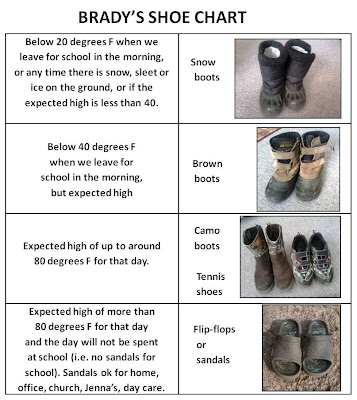 So, we've had a couple of rough mornings with fits about what shoes Brady is going to wear.

There are schools of thought - like Love & Logic, for example - that would encourage letting him learn by natural consequences. I do some of that with him, but he has a strong will and sometimes it takes awhile for things to sink in. He'd do it despite repeated problems associated with it.

There are other schools of thought that would say you just make him do it and if he doesn't he's in trouble.

Again, this kid has a strong will. Things take a long time for him to submit to by sheer consequence or yelling or whatever. He'd be in trouble a lot and would eventually submit, but I fear I'd take some of his independence and spirit along with his obedience. I won't do that just because he makes seemingly routine things more complicated. I will find another solution.

The reason the shoe thing is an issue is this. He would want to wear his snow boots EVERY DAY. Even though it is supposed to be 60 degrees and his feet would get hot (not conducive to learning) and there is a nearly irresistible urge to stomp around in them, which is not allowed at school leading to problems during the day.

So my solution was a shoe chart. A picture of each type of shoe he has and the conditions under which he is allowed to wear a certain type. I simply said, "Okay, from now on we'll have a shoe chart." He loved that idea so much he bugged me for the shoe chart every day until I finally did it. I don't think we'll have any more arguments about it. Note the chart is very detailed. If I don't cover every possible scenario, I have no doubt he would call me on it.

This way he learns there are boundaries, there is structure, there is routine (he told me the other day, "Mommy, I love our routine.") and there are reasons we do things a certain way. Many people don't agree with reasoning or explaining with kids, but that's no matter to me. For Brady, he is so inquisitive, so curious, so smart and so strong-willed, without this type of structure and teaching, we would be in constant conflict and he would learn only by force, not by logic.

Plus he loves the numbers idea with temperature. Again, play to a kid's strength and their unique learning style and personality, and I believe you will have more cooperation and a smoother time of things with them.

Posted by Burbs to Boonies at 9:41 AM