Here are a few things I cooked in the last week. All are quick, easy and healthy. 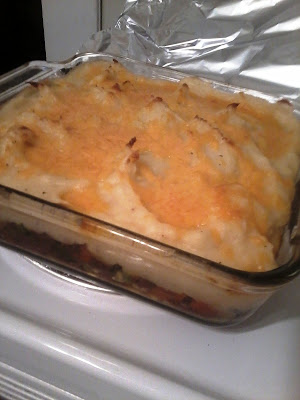 1 lb ground meat (I used venison)
2 cups hot mashed potatoes
4 oz cream cheese, cubed (I did not use it for this recipe as I didn't have any and it was still GREAT! You could use some milk instead)
1 cup shredded cheddar (I've used shredded mozzarella as well)
4 cups frozen mixed vegetables (canned works well too or even fresh cut up)
1 cup beef gravy (I don't eat anything beef, so I make a gravy using the sauces I brown the meat in (see below) and then add 1 Tbsp corn starch (flour would work too) mixed in water)

Brown meat in skillet and drain (I browned the venison in a mixture of soy sauce, Worcestershire and liquid smoke). Mix mashed potatoes with cream cheese (or milk and butter if you don't have cream cheese on hand) and 1/2 cup of shredded cheese until well blended. Stir vegetables and gravy into the meat. Spoon meat and vegetables into a square baking pan. Cover with potatoes. Sprinkle with remaining cheese. Bake for 20 minutes at 375 or until heated through. 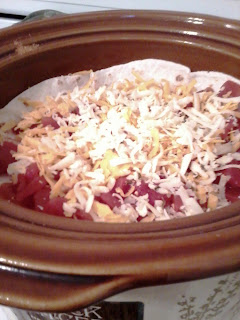 Tortillas (the original recipes says 12-14 small ones, I used 4 large ones)
2 cups shredded cheese
1 Tbsp fajita seasoning (I used taco seasoning cuz that's what I had)
28 ounce can of tomatoes
15.5 oz can of beans (I used pintos)
15.5 oz can of corn (or frozen)
2 cups of salsa (I used homemade)
2 cups shredded chicken (I used one large can of chicken breast meat, you could also use browned ground meat or just beans)
I also added black olives and you could use onions, green chilies, jalapenos, sour cream, guacamole, whatever you can think of. 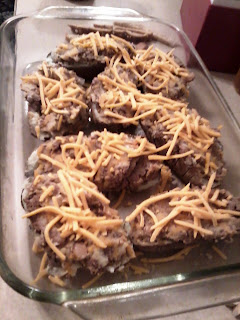 Preheat oven to 375. Scrub potatoes, pierce with fork or knife and bake 1 to 1-1/4 hours (or just microwave like I did!). Let cool for about 10 minutes, then cut baked potatoes in half and scoop out potato from the skin. But leave enough to have a sturdy shell for the filling. Mash the potato filling with sour cream and milk (I didn't have sour cream so put a little lemon juice in milk to sour it a bit, like buttermilk). Stir in 1 cup of cheese and seasoned taco meat. Spoon filling into potato skins and sprinkle with remaining cheese. Bake for 20-25 minutes.

I went ahead and made filling with 1 pound of ground venison, and also added some beans. What we had left over we'll roll up in tortillas for breakfast! Yum!
Posted by Burbs to Boonies at 9:23 AM