Behavior booster: Pick a treat for each day

I don't know about anyone else's kid, but Brady sometimes gets obsessed with one particular thing. He delves into it intensely and then after a few weeks moves on. But those few weeks can be very trying.

He thinks about "it", whatever "it" happens to be, all the time. For awhile it was the Pacman video game up at the restaurant. Then it was Sponge-Bob. Then it was his Nintendo DS. Then it was playing Angry Birds on the computer. Then it was natural disaster movies (Think Twister and 2012).

I have learned that feeding that obsession is not a good idea (except when it's things like math and making "inventions," those are wonderful creative learning obsessions). He wants to do it or watch it ALL THE TIME. He'll think about it constantly and argue why he should be able to do it RIGHT NOW.

So, I came up with a plan. For awhile we had Nintendo Sunday, Angry Birds Monday, Sponge Bob Tuesday, Natural Disaster Movie Wednesday and Pacman Friday. That way, he'd get to do a favored activity as a treat once a week. He wouldn't feel deprived not being able to ever do it, and he knew when he'd get to do it and didn't ask for it the whole rest of the week.

He's moved on from most of those, but we still have Nintendo Sunday. Since that worked so well, I decided to try it in other areas. We now have No-Screen Saturdays and Try-Something-New Thursdays. He accepts these special activities on a certain day without any hesitation at all. I think he loves this idea of structure and routine. It also keeps things unique and fun.

This also teaches him, I believe, that some things in life are "treats," not givens. He has to earn them. And some things are not good for our mind and body if we do them too much. Also, it reinforces the very difficult lesson that we cannot have everything we want all the time.

Here he is playing Nintendo on Nintendo Sunday. Oh, he can also "buy" 30 minutes of Nintendo on Fridays from his prize store and boy does he get excited about that. 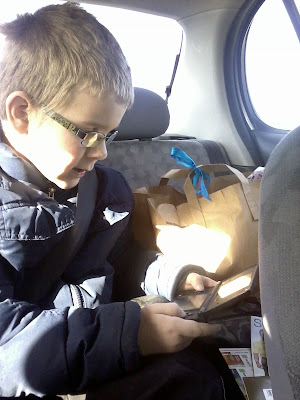