In pursuit of faith: the scenic route 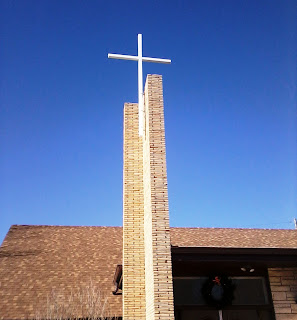 My mom tells me she can't believe I pray all the time. That didn't used to be me. It's been quite a journey and she was in the passenger seat with me as I tried to work it all out.

My pursuit of faith was mostly done as an intellectual exercise. I like doing things that way. My two main careers - before my job now as IT person for our small business - were journalism and science. In both of these fields the main goal is to uncover the truth through research.

I wanted to apply that to faith also.

Now some people are saved or become Christians early in life. They just know. I'm so amazed by this. My path was winding, bumpy, fraught with doubt and questions, and spanned decades.

My spiritual beginnings are rooted in Catholicism. My mom's mom died when she was young, but she left behind a strong faith in the Catholic church. My mom feels a connection to her mom within Catholicism and we were raised in that church. When I started working as a teen I stopped going.

After that, the first time I felt a stirring of desire to find faith was at age 21 (in 1993), after being the victim of a horrible crime in Mexico. As I heard someone saying the Lord's Prayer - and realized it was me - I knew I believed in something more. But what?

That stuck in the back of my mind, but I didn't act on it other than acknowledgement. The next time I pursued faith was about 5 years later (1998) when I was the religion reporter for the St. George Spectrum in Utah. I spent time interviewing people of all faiths, including Christian Science and Baha'i, as well as sat audience to Mormon missionaries.

I also had a very good friend who was Wiccan. This was a fascinating time. I had not known so many different religions existed. I learned a great deal and thought a great deal more. But I still had no determination of my own faith. I was looking for something that "made sense to me."

I went to a Catholic Cathedral in Salt Lake City, Utah, in 1999. Then I didn't go to any church for many, many years.

After experiencing postpartum depression in 2005, that desire for faith began pushing into my conscious mind more and more. Something was missing. I felt lost.

Again, I tried on church hats. I took a months-long study course on the Baha'i faith and met some truly amazing people in the process. I went to a Unitarian Universalist church, a southern Baptist church and a Methodist church, which led me to yet another Methodist church in Florida, and, in the despair of divorce and a child with struggles, I found God. Or He found me.

And, you know what, it was not an intellectual exercise. It wasn't something that "made sense to me." It was not the culmination of research and study and understanding. It was a singular moment when I didn't want to be alone anymore. The release of a weight I had no idea I'd been carrying. The heavy weight of loneliness.

And not the loneliness that comes with being single. The loneliness of having to go through life alone. All alone, in every moment. With God, I am never alone. It was the most beautiful thing I had ever thought about. And no amount of searching, no amount of studying, could ever teach me the thing I knew in that one, clear moment.

I wished I could have lived my whole life with that knowledge.

But that one moment has led to a lifetime of trying to grow spiritually and changing the way I live. To understand what it means to live as a Christian. Wow! What an adventure!
Posted by Burbs to Boonies at 4:18 PM