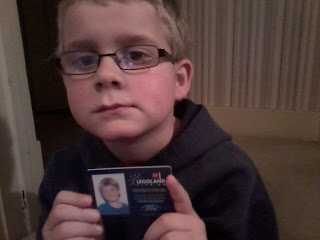 Brady had been working all week to be able to go on the Reading Counts skating party. He had a few incidents of acting out that put him on alert. Any more of that and you can't go.

He really wanted to go. He woke up yesterday morning saying, "Today's the reading counts party!" He was on his last chance of being able to go.

So around noon-ish I called the school and the receptionist told me he wouldn't be going :( He was on the list of kids that weren't, she said.

Oh I was sad. I cried. I mourned for his loss. Then I thought, well, it's first grade, there will be other trips, I won't be stern with him when I see him as he's already paid the consequence that would affect him the most. Not going.

I walked up to get him from after-school, ready to hug him, comfort him. But he bounded up yelling, "Skating party!" And he proceeded to tell me all about it, how tricky it was, how by the end he was zipping around, how he spent a lot of time on the carpet resting and holding on to the wall.

He went. He earned it. I was so happy and proud I could have done a little dance, but I just hugged him and enjoyed the moment. What a happy end to a sad mistake.
Posted by Burbs to Boonies at 8:49 AM