The sweet heart of a child

I didn't want to tell Brady about what happened in Connecticut. He shouldn't have to know at his young age that such tragedy happens. But the point was made that kids will likely hear about the shootings from classmates, older kids or teachers at school on Monday. Better for them to learn of it in the safety of their home with their parents there to answer questions.

So this morning in as simple and gentle a way as I could, I told him about this horrible thing that happened. He was sad and asked questions like, "What did the teacher do about it?" and "Were any kids brave and try to kick him?" He processed it for a few moments, asking me what happened to the guy and saying how he would have handled things by being tough and stopping the man.

Just as we were about to leave the house to go to school, he said: "Maybe he killed himself so he could go up to Heaven and say he was sorry to all those kids."

It was one of the saddest and most beautiful things I've ever heard. I wish so much that his view of the world was real. That bad guys felt remorse for the horrible things they do. That kids could somehow single-handedly stop someone like that.

In the meantime, even though he will learn over time that the worst, most unfair things happen in this world, sometimes for no reason at all, I hope somehow he will keep that optimism. That his innocence can maybe exist in a place where no horror can reach it. But if it does, I hope he will fall back on the only thing I told him we could possibly do: PRAY. Pray for the families and the community, and pray that no one ever gets so sick like that man again. Maybe that's what prayer is, the pure, innocent optimism of a child that believes all things are possible.

My goodness, do I love that kid.

How did all of you handle this situation with your children? 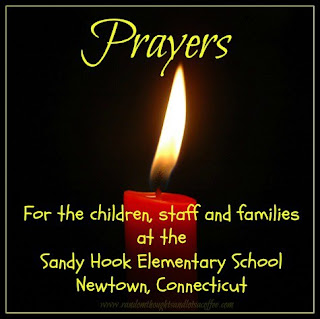 P
--Photo taken from http://www.randomthoughtsandlotsacoffee.com/random-thoughts-blog.html
Posted by Burbs to Boonies at 11:25 AM