Brady was still 6 years old when he realized he was "different" from other kids. I sure didn't think something like that would occur to a kid so young.

Sometimes he sees this as a positive: "I'm really good at math and I don't laugh at people's underwear and toots!" Other times, it seems to bother him a little. Most kids eat school lunch but he can't because of his egg allergy and he doesn't want to take avocado to school because 'the kids will ask me about it'. Most do not have glasses or have to wear patches at home twice a week. And sometimes he gets in trouble a bit more than others.

Fortunately these sullen times don't last long at all. He is so outgoing, so friendly, so social, that it overrides any feeling of difference he may feel. He'll tell me, "I ask everyone to play soccer with me at recess until someone does." And someone always does. Sometimes a boy, sometimes a girl, sometimes a lot of people. I found him one day at day care supervising a whole bunch of kids trying to cover an entire sidewalk section with pebbles. "I'm the boss," he told me. "I told them all to keep up the good work." Turns out he had started the project himself and it looked like so much fun that all the other kids joined in. I've seen that happen with him since he was 18 months old.

We do our absolute best to tell him, hey, it's okay to be different. You're unique. God made only one you and He didn't make you half-way, kiddo, and He doesn't make mistakes. Our differences make us special and interesting. He'll tell me, "You're totally normal!" Ha! I say, "Okay, how many mommies do you see out there digging up old bottles and tromping through the creek beds or cooking deer hearts?" He doesn't have an answer for that.

I'm glad he's different. I see too much same-ness in the world, and fear of going against the norm. I think trying to measure up to or trying to be like other people creates a lot of the problems out there. It leads to a watered-down person, someone afraid of who they are, always chasing a futile goal of being something else. It keeps people from standing up for others or for what they believe is right. The most powerful thing a person can do, I think, is embrace their differences, celebrate them, shout them to the world. This is ME, I am who I am, and I'm doing my best. I think all people start out unique and different and if we'd all stay true to who we are, we'd probably be a lot better off.

It's my hope my child will never live his life with any ounce of shame or fear or guilt over who he is and the challenges he faces. There will always be things a person needs to work on, all of us do and we shouldn't shy away from that either. But at his core, he is a wonderful and special human being. He is open and honest and compassionate. He is smart and funny and loving. He may be a natural leader. He is strong and fearless and enthusiastic. He is full of ideas and inventions and plans.

His differences, his challenges, are as much a part of him as the other traits we praise and admire. You can't have one without the other. And I wouldn't change one thing about him.

Thank you God for this kid. Let him never feel bad about who he is. 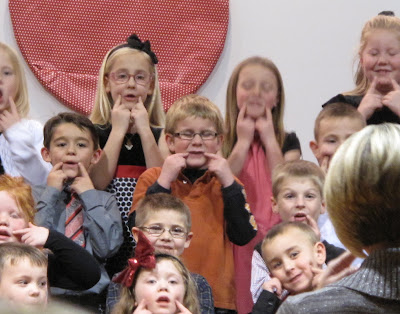 There he is in the middle! So cute!