The drought hits home, tough times for the Midwest

Natural disasters like the Hurricane Sandy on the East Coast and Hurricane Katrina in New Orleans, or the slew of tornadoes that hit Joplin, Mo., are immediately on the country's radar.

The slow-simmering drought in the center of the country is harder to wrap your mind around. When Brady and I moved here more than a year ago, he went fishing for the first time and caught a nice bass. He was so proud of it, he asked my husband's mother to cook his up special so he could eat the very one he caught.

A year later we went back to that same pond to find it nearly dried up with the dead carcasses of 4-foot-long grass carp ringing its edge; they died gasping for air when there was not enough room for them to swim anymore. Not only that, the water had turned a bright green and its smelled awful. The pond - like the carp - is dead.

The drought really hit home for us then. We had felt it in other, smaller ways. For one, we had to struggle to keep our garden alive without rainfall. And when we did, instead of just providing for us, it became a haven for thirsty creatures. We had bugs everywhere and rabbits, birds and even deer ate the bounty of our plants. A walnut tree in our yard began dropping limbs at an alarming rate, all infested with borer worms. Turns out the drought-stressed tree had become vulnerable to invasion. We think we were able to save it, but only time will tell.

Pheasants and quail, which my husband likes to hunt, have been almost nonexistent around this area.

We like to live off the land as much as we can, and the drought has now affected that for us. There is less game, our fishing pond is dried up, our garden did not produce very well and we nearly lost a source of walnuts.

So far, its only influence on the rest of the country is perhaps higher prices of corn and other produce-dependent foods. But that could change. Here is a recent story about barge traffic on the Mississippi River: http://www.nytimes.com/2012/12/24/us/drought-threatens-shipping-on-mississippi-river.html?_r=0

Here's another on how it has affected farmers, calling it the worst drought since the Dust Bowl:
http://communities.washingtontimes.com/neighborhood/politics-blue-collar/2012/dec/28/drought-fiscal-cliff-dairy-cliff-why-farmers-may-b/

If it doesn't let up, the effects may spread outward, raising prices throughout the country.

My husband said the other night, "What can we do?" Nothing I know of, but pray and try and conserve our water as much as possible. Turn off the faucet while brushing teeth. Collect rain water for the garden in the summer, what little rain there is. Take shorter showers.

Drought is a natural process, one we can't control. Perhaps these things happen to remind us that we need to pray, that during tough times we need to have faith and turn to God. Faith is easy when things are going our way, and so now it is tested.

I know one thing. If we get a blizzard here this winter, people wouldn't complain near as much as normal. We need the moisture, they'll say. And my goodness, do we ever.

Here's Brady and his fish, back when the pond was still alive: 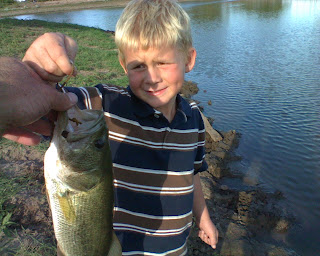 But you can see in the background of this photo, the drought was already taking hold: 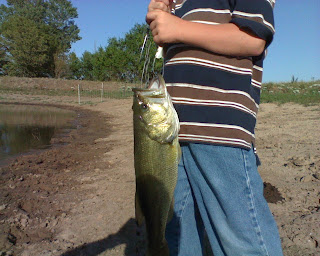