Last week our TSNT (Try Something New Thursday) was almonds. I prefaced this choice with, "They're a nut, just like peanuts that you like. No egg. No nothing but the nut." He ate half of one, said it was good, kind of like peanuts, but he didn't want the rest. That was fine.

On our drive to Memphis, when Jase and I were eating almonds, he asked for one on his own and ate the whole thing. This Thursday deal is just so great for opening him up slowly and carefully to new foods.

He just accepts that Thursday is the day he tries something new, and if he balks, I tell him that at least I'm not giving him peas every night (which he absolutely loathes) or giving him some of everything Jason and I are eating every night. He doesn't want that, so he's content with that one night a week.

I know some people might think this is pandering to him, but that's no matter to me. I know my boy, I know how much food affected him before we knew of the egg allergy and that caution, developed from age 1 to 4, is deeply ingrained in him. 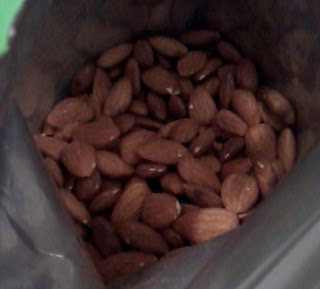 If I force him, he will rebel internally and do it only because he has to. If I take it slow, let him see we feel it is important, it will help him develop a healthy, varied, trusting taste for different foods. So that's what we will do.