The power of rewarding a kid... 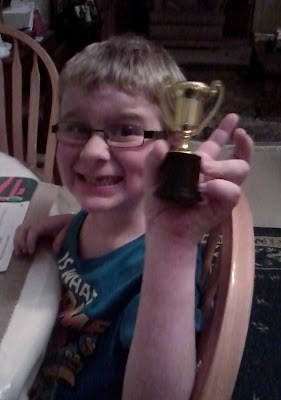 Brady had a good day yesterday, a really good day. Part of it was our talks this week about team work, I think, but probably even more was the incentive that if he has 10 consecutive good days at school, bus and day care, he can take his Nintendo DS on the bus for 1 day! He's been arguing for that ALL YEAR long, so Mommy's offering of even 1 day of this is a big deal.

Regardless what the motivation was, there's HUGE worth in him seeing that he can in fact stay within the lines, but still be himself, and seeing how good that can feel. It also teaches the value of working hard and earning something.

Beyond that, we've been talking a lot about handwriting as it - and spelling - are his weakest subjects, really his only weak subjects and even those are in the 70-ish percent range. Spelling has already improved based on his teacher's suggestions (Mommy, she has SUCH good plans!) but he wants to rush through handwriting. I think he has a hard time believing that it is important to slow down and write carefully. My most effective argument has been if you don't write clearly, no one will know what you are saying! He certainly doesn't want that! He has a lot to say!

But yesterday he took his time with handwriting at school, slowed down and did his best and for the first time ever got a 10 out of 10.

Jason decided to bring him home a prize for this hard work and it was a little Dollar Tree trophy. You'd have thought he brought Brady his own pony or 4-wheeler or some other grand thing. He has admired that little trophy all last night and this morning, carrying it around with him. He must have hugged Jason 10 times and told him, "Thank you a million times!" and "You're so generous."

He went to his room and got a dime for Jase and also gave him a play-money $100 Cub Cash (based on a reward system at school that he uses for us at home).

Jason also gave him a quarter (since Brady said, "Wow, a trophy! I thought it was going to be a quarter, but this is way better!") which Brady turned around and gave to me so I'd have a prize too :)

He's so proud of it and there is nothing better than that look on his face of wonder and joy. Never ever underestimate the power of a small gesture of positive reinforcement and what it can do for a kid.

Who knows what today will bring, but last night was a single moment of pure happiness for us as a family. Thank you, God.
Posted by Burbs to Boonies at 9:51 AM