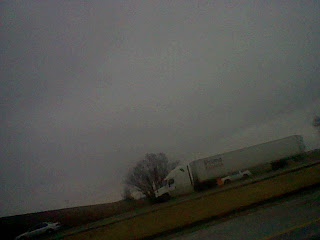 They kept saying, "A front is coming." You know those weather guys, they say all kinds of stuff.

But Brady and I were driving home from Wichita today. We're toodling along. My car tells me it is 72 degrees.

Exactly two minutes later I looked again and it was 53 degrees. No kidding. We passed right through some front barrier and literally the temperature had dropped almost 20 degrees.

By the time we got to his school it was 47 and man were we COLD. I've never had that happen before. I've gone through a gradual temperature decline, but never have I looked one minute and the next 20 degrees colder. Weird.
Posted by Burbs to Boonies at 4:13 PM