I'm happy and lucky to be a soccer mom! 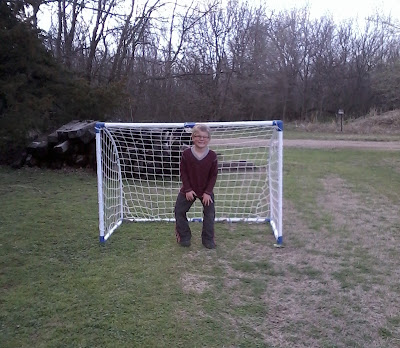 According to Wikipedia, this is the definition of a soccer mom:

"The phrase soccer mom generally refers to a married middle-class woman who lives in the suburbs and has school age children. She is sometimes portrayed in the media as busy or overburdened and driving a minivan or SUV. "

"The phrase soccer mom broadly refers to a North American middle-class suburban woman who spends a significant amount of her time transporting her school-age children to their youth sporting events or other activities. Indices of American magazines and newspapers show relatively little usage of the term until a 1995 Denver city council election. It came into widespread use during the 1996 United States presidential election."

I suppose I qualify for some of that. I'm a middle-aged, middle-class mom with a school-age kid, and he is in soccer and it seems like we drive all over the place, though it's in a 2001 Toyota Corolla instead of a minivan or SUV.

But, that's not the "soccer mom" I'm happy to be. Though it's fine too, LOL. Our soccer season has been a bit of a roller coaster, and in the wake of that I thought, "You know, I never imagined I'd be the one teaching Brady soccer." Life doesn't always work out like we imagine.

Brady's dad - who got him the awesome soccer goal above that we use all the time - is in an other state and so coaches Brady in sports when he can or over the phone. Brady's step-dad and I are self-employed, so his work prevents a lot of coaching. Brady doesn't have an older siblings or cousins or uncles or close-by neighborhood kids who can teach him.

So that's leaves me, who knows next to nothing about soccer or sports in general really. At first I thought maybe that was sad for Brady. But then I thought, well, sheesh, it doesn't seem to bother him or seem like he thinks it's odd that him and Mom practice soccer every night and Mom coaches his soccer team. He told me he wanted to coach soccer when he grows up. And in fact, we have a really great time. Lots of fun, good exercise, and we learn something.

Gosh, I couldn't ask for more than that in the whole wide world. Stepping outside your comfort zone is a good thing. And learning alongside your child is ever better. So if something falls to you to teach them, I say embrace it, jump in with both feet and take off running! Here he is playing with a fast-made friend - and soccer opponent he had met the week before - at the park after Saturday's game. He looks so cute in his cleats! 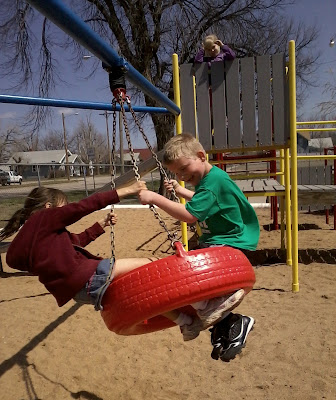 Posted by Burbs to Boonies at 6:54 AM