Sports: a good learning tool for parent and kid 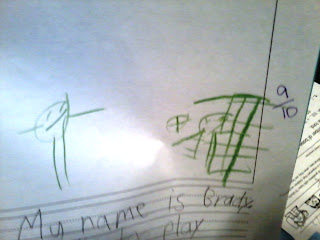 Just when I was convinced Brady would shy away from soccer given some of our struggles, he came home with this in his school journal. Here's a picture of him playing soccer and what he wrote about it.

The next day saw more evolution in his thoughts on the game. He became convinced the other team made an unfair goal and got so upset and focused on it so much he was sent out of the game for a time.

But by the second game, he had accepted the idea that the coaches deal with something that is unfair, not the kids. Beyond that, during the first game he seemed very shy about being near the fray where everyone was trying to kick the ball and would stand back. But by the second game, that kid tore around right in the mix and got a few good kicks.

It is absolutely amazing to see him come around to his own ideas about something; to think about it and change his behavior based on what's he's learned. My goodness, that is a tremendous life skill if we can keep it up.

We have been practicing with our own soccer goal, a present from his Dad at Christmas, every day since Saturday. And on his Dad's advice (he's a sports writer), we have been watching soccer videos too.

Despite my frustrations last week, I do think sports like this are great for a kid who has social or behavior issues. If I can just stay calm, he will learn a great deal. I have also remembered my parenting through my flaws post. For me at least, parenting can be messy. I'm emotional and have to work at keeping my own anxieties down, so I just have to take it day to day, balance praise with consequences, know who Brady is and who I am, and move forward doing the next best thing.

He's pretty competitive, but he is learning how to win and lose gracefully and how to cheer for his teammates and even admire his opposition. I think we'll sit baseball out though this year. I can't imagine him wanting to sit still while everyone bats, regardless of which team. 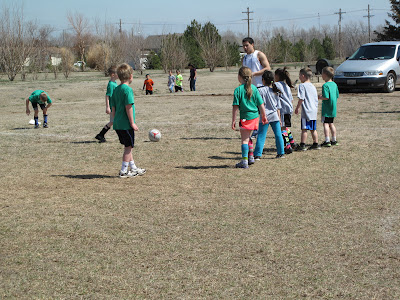 Posted by Burbs to Boonies at 4:47 PM