As a parent, I find ideas when I hit bottom 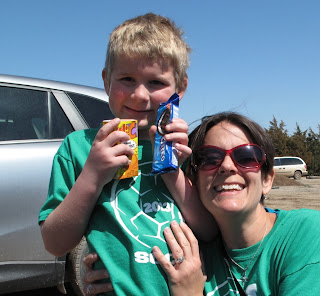 Brady is in soccer now. A part of me had wanted to put off organized sports for him another year. Lots of people in his life thought he should be in it and sports are great for kids. But what changed my mind was that HE wanted to be in soccer.

His doctor told me I should put him in social situations, but that I would have to be an active part too. So I'm assistant coach.

I don't know if any of it was a good idea. I only know it has been challenging for both Brady and I. Soccer practice is at 5:30, at the end of a long, busy day for both of us. We've had a tough time. I'm the assistant coach, yet I'm his mom too. I don't know how to balance that.

For whatever reason - being tired, the excitement of running around, just one thing too many in the day - self control has been difficult for him to keep during practice and lots of people are out there watching their own kids. I have to talk to him over and over. He's had some meltdowns. I find myself imagining what people are thinking, who knows if they are or not, and honestly it shouldn't matter one way or the other.

Maybe I expect too much too soon? Am I too prideful? Do I make it worse in my mind than it is? Do I not have enough patience? Would it have been better if I hadn't been assistant coach? I wish I could just pray and know what to do, but too often the answers elude me, at least for awhile. Why is that? There are just so many questions.

I have to admit I have been less than graceful in handling the situation. I get so frustrated and I have let that frustration show to Brady. I find myself wishing I could go back in time and not be in soccer, but we won't quit. So I find myself praying over and over.

As with other things this week, I realize I have to make more time. I have to get to him earlier. I have to leave work earlier (it's a long commute). I'm fortunate to be self-employed in our family business and can do it, but that in itself means there is LOTS of work to do and no one else to do my part of it. But I have to adjust my schedule and just DO it somehow.

Maybe he can have some time to rest beforehand. Maybe I can give him a better pep talk ahead of time. Maybe I can add some special bonus or prize if he does well. And maybe I need to ask him, I'll do my part of teaching and motivating, but what can you do to make it better?

Yeah, I guess that's what I need to do.

And on the upside, he had a wonderful evolution in thought during the soccer game Saturday. At first, he hated it. Wanted to sit out. Complained the other team was mean and, when they got a goal, he hated them.

Again, I felt frustrated as I watched all those other kids throw themselves into the game and have fun, and Brady sat out with his arms folded and his head down. But, by the Grace of God, I kept calm and told him it was like when he was 2 and he was scared of a wading pool with fountains in Virginia and had to get used to the idea slowly, one step at a time over the course of an hour.

I told him, "If you want to play soccer, this is it. You'll have to work it out."

And he did. He got a good kick and everyone cheered. He decided the other team was okay and even went up to their coach after the game (they won) to tell him they got some good kicks in. By the fourth quarter, even though it was his turn to sit out, he wanted to go back in.

I'm also offering him an extra $1 for prize store if he does good at the game tomorrow, and if he has a good week next week, putting some prize store items "on sale."

Times like these make me think, make me squirm, make me fall to my knees. I feel like I'm not good enough to parent this unique human being, that I can't come up with the things that will help him learn and grow. But that kind of thinking is useless. When I fall down that far, God picks me up and gives me strength and new ideas to try. I have to hope that I'm worthy in the charge He's given me with this wonderful little person. I hope I don't screw up too much.

(Aw geez, I got teary eyed writing this one. Are there other parents out there who understand?)
Posted by Burbs to Boonies at 5:18 PM