About the time my son turned 4, I was introduced into the world of living with food allergies. I personally am only allergic to Tylenol and mildly allergic or sensitive to mushrooms and onions, but I can have a few now and again, no big deal.

But my son has one bite of ANYTHING that remotely has egg in it, be it egg white or egg yolk, powdered, liquid, cooked or not, he vomits everything in his stomach and sometimes breaks out or his eyes get puffy. It's really a miserable deal. Before I go any further, I'll share below my FAILED attempt at pumpkin pie made with applesauce instead of eggs. Some things work and some don't :) But never give up! 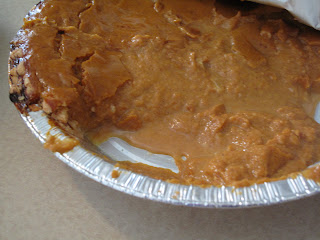 We called it "pumpkin pudding." It tasted good, but not your usual pie consistency.

Here's an excerpt from a column I wrote for the Great Bend Tribune earlier this year:

"For the first four year's of my son's life, he never knew what foods would make him sick. And not just mildly sick. Sick enough to throw up everything in his stomach. Understandably, his undiagnosed allergy to eggs ... made him very cautious of new foods. He was reluctant to sample anything he was not 100 percent certain would not affect him."

This allergy has made for an interesting cooking and dining experience since I've found egg in cakes, cookies, brownies, pies, breads, rolls, ice cream, meatballs, peppermint patties, candy corn, half of the candy bars on the market, cream eggs, black bean burgers, breaded meats, imitation crab meat, Caesar and other dressings, cream sauces, on and on.

There are many other allergies out there beyond eggs, some that are life-threatening and involve a lot more than what we have to do. But I thought I'd list a few considerations if you're dealing with allergy-related cooking.

1) Plan ahead always! Whenever we go to a restaurant, I bring along a selection of food for my son. I've gone the "wing it" route, thinking I'd know for sure if something had egg or not, only to have a biscuit with an egg wash on top make my son's face break out and his eyes get puffy. Same goes for having dinner at a friend or family member's house. Different people cook different ways, and even if you have told them about an allergy, they might forget since they don't have to think about it every day.

2) Substitute, substitute, substitute! Just because your child or husband has a food allergy, it doesn't mean they cannot enjoy just about everything. Egg-drop soup or eggnog may not be in Brady's future, but I have made cookies, cakes, meatloaf and other items with applesauce, and even a grits and cheese dish in which I used a corn starch mixture. There are other substitutes for egg that I haven't tried yet, and whatever the allergy is you are dealing with, you can research the internet to find out the alternatives.

3) READ LABELS CLOSELY! This seems like a no-brainer, but there have been times I have been just about to use something, thought oh shoot, I forgot to read the label and what do you know? EGG! I've also taken to just scanning the "Allergens" warning at the end of ingredients. But one time, with a maple egg at Easter, the allergens warning said nothing about egg, I let Brady eat it, and as I looked closer, sure enough "egg albumen" was listed. I stopped him immediately after only a bite or two, but it was too late. He threw up on the way home.

4) Check nutritional charts if possible. Lots of fast food restaurants put their ingredients online. I'm always amazed to find out just how much stuff is in their products.

5) Tell EVERYONE with any tie to your child. I have to make sure my son has special treats for party days at school, for a class mate's birthday party, I send his lunch to school. Despite our best intentions, during an Easter egg hunt he ate a candy in one of the eggs before anyone saw him or he even thought about it. Sure enough it was a fluffy cream egg and he threw up at day care that afternoon. His teacher emailed me a few weeks back about doughnuts for a classmate's birthday party. Major eggs!! So I sent him with a special treat to eat instead. And his after-school care teachers are wonderful about baking special brownies and cookies with applesauce. Doctors also have to know as he is not supposed to have the flu shot (and the school too!). Communication is key!

6) Just in case, keep medicine around for potential allergic reactions. In our case, benadryl is enough and it helps.

7) Be alert and make sure your kiddo knows what to say no to. We were at a grand opening for a park and ladies were walking around with plates of cookies and they offered him one! I don't think he would have taken one, but I immediately stepped in and told her, no, he's allergic to eggs.

8) Don't hesitate to ask. If your child is offered anything anywhere, or if you're not sure about something at a restaurant, ask them. If they don't know, don't risk it.

9) Be careful on Halloween. We have to be very picky what he takes as Milky Way, 3 Musketeers, Snickers and others have egg in them. Most people are willing to let us be selective in their baskets when we explain the problem.

10) Be patient. I have found with Brady that for his early impressionable life, he was traumatized by food and became extremely suspicious of it. Who can blame him. He never knew what would make him nauseous. Everyone thought he was "picky." At times he was chastised for it. Now we know. It has taken a long time to get him to open up to trying new foods. I find he prefers only whole foods, not something with a lot mixed in like a casserole. He wants to SEE what is in it. He has had to build trust that I really KNOW if something has egg or not. And planting a garden sure helped because he planted it and watched it grow. It was his, he had ownership in it and knew it was safe.

11) Provide lots and lots of healthy alternatives. I pack Brady's lunch and am always trying to come up with fun things for him to have variety. For meats I used canned chicken, canned tuna, meatballs and lunch meat. For other proteins I give milk, peanut butter, turkey hotdogs, yogurt and cheese. For veggies, you can put mandarins, cut up pears, individual packs of sliced apples, raisins, craisins, carrots, peppers, half an avocado with a spoon, soup-at-hand tomato soup, bananas, on and on. Decent carbs are baked chips, pretzels, whole grain bread, rice, spaghetti, mashed potatoes, sweet potatoes, granola bars, dry cereal. A healthy and diverse lunch can be easy with a little planning.
Posted by Burbs to Boonies at 7:21 AM