When a child struggles, don't give up!

I shared last week how soccer so far had been a frustrating endeavor for Brady and I. It was new for both of us. New rules. New game. Huge learning curve for us both.

But, we stuck with it, and this week's game was the best! We lost as a team, but as far as I'm concerned Brady and I won big time.

I talked to him before the game, told him to promise me he'd try really hard to not throw any fits no matter how upset he got by anything: thinking a goal wasn't fair, the other team was winning, getting kicked during the game while trying to get the ball. He promised, and when the other team got 3 goals IN A ROW, he had to make good on that promise.

He balled up his fists so tight and scrunched up his face and then... he let it go. What a triumph to see. And me personally, I got so involved in the game I forgot to even worry about anything. Praise God! Now we're both looking forward to next week!

We're both trying our hardest and by gosh, we're progressing. And the best part was, after the game we went on our traditional post-game-Wendy's-frosty run and ended up sitting by one of the other team's (that beat us 3-2) coach and his kid, a boy who had made it his goal to block Brady from the ball at one point. Brady and him kept jumping in front of each other with their arms out during the game and instead of getting upset, Brady embraced it.

Brady now calls his kid his new best friend because they talked and talked and talked about the game and how exciting it was and who did what. And the kid told Brady their team was called the Monkeys, so Brady said: "Here's a joke. Then where's your banana? Hahahaha." He cracked the whole family up. He also told the coach, "You guys sure yelled really loud!" They did too, he's not exaggerating! Yikes! Felt like we were playing an Olympic game or something.

At any rate, this experience has been so good for us both. There were days I never thought I'd say that. Any parents out there with kids who have unique struggles, don't give up, stick with it, hold onto the roller coaster and go, it CAN work. I'm telling you, there were days I cried and wanted to give up. But I should have had more faith in Brady ... and me... and God.

Oh yeah, and then afterwards we went to the park and ran into a girl he'd played against last week (our only win so far! Yay). And she said, "I remember you. You cried because you had to sit out and you wanted to play." Sigh. Well, at least he's memorable, and it didn't phase him one bit. They went on to play together for the next half hour.

That means He sure does give you more than you can handle alone. And in those times you have to seek Him out more than ever. I totally agree. He guides me to situations that are so hard, so confusing. But the results from those situations are the most significant of all. 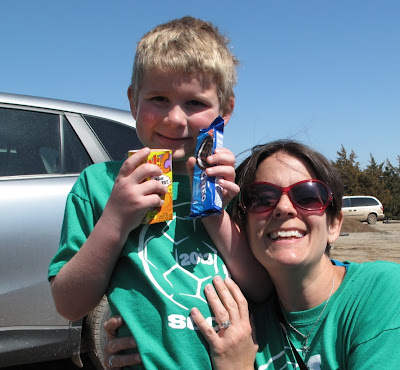