It's time to cook the heart again. Hubby got a nice deer over the weekend, first of the season.

As Brady and I stood in the dark, holding flashlights and watching my husband and his father remove the innards of the deer - heart, lungs, liver, intestines - it occurred to me that Brady has learned more about where food comes from in the last year than the whole rest of his life. Heck, he has a more intimate knowledge now than most of us adults do!

He's now seen a deer gutted and skinned, doves shot, skinned and eaten that night, fish caught, cleaned and cooked, wheat harvested and later sifted and ground at home and then used as breading, mulberries and apples and walnuts collected from trees, and then cleaned and used in cooking. And he has planted, watered, watched, harvested and eaten garden vegetables from our back yard.

The gutting of the deer led to lots of discussions with Brady.

"I didn't know blood was that liquid-y," he said. "What is the puffy thing?" That's the stomach. The Indians used to clean them and use them to hold water. Brady thought that was almost unimaginable.

To some it may seem gross or brutal. But I want him to understand on a fundamental level where our food comes from. I want him to have a personal responsible connection to it. To appreciate the life given for it. At the end, Brady and I prayed to God and thanked him for the sacrifice of this animal that will now feed our bodies for the better part of a year. What an amazing gift.

This is something I feel is lacking our society today. Food is entertainment, a reward, almost a drug at times, not the fuel that powers our bodies. If we saw it in that simple, technical way, perhaps obesity would not be as much of a problem.

Now, I'm no perfectionist by any means. I eat store-bought chicken, fish and pork (though I'd prefer to only eat hunted turkey, quail, pheasant etc., and in time we may, and the drought has limited our fishing options) but I hope Brady understands where they come from. And I enjoy sweets WAY too much. But I try hard to see food for what it is and how it is processed in our body.

When we eat the deer my husband provided for us, Brady will be able to imagine the animal it came from. He can understand all the energy that went into getting it from live animal to the plate. He, hopefully, will not take it for granted. When he eats vegetables from our garden (he carried cucumbers around like they were treasured friends this summer), he will feel a connection to it and he will appreciate the land that grew it and the time we spent on it. Food is an integral, critical part of life. It is my hope we can learn to eat to live instead of living to eat. 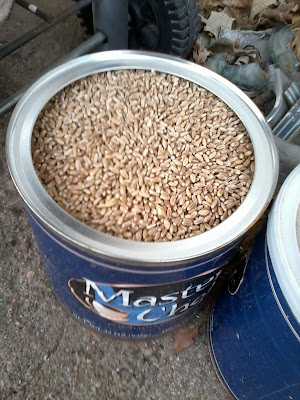 Wheat we were given at the end of the combine ride this summer and also that we collected when one of the grain trucks spilled a small mound down the hill! We will sift it and then grind it in our coffee bean grinder to make whole wheat flour. I'd like to get a flour mill sometime! 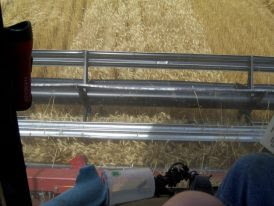 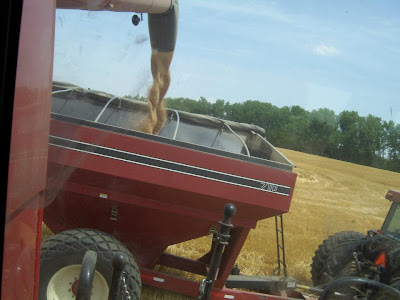 Photos from the combine ride, and wheat getting harvested. 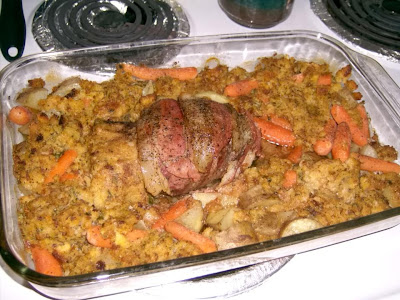 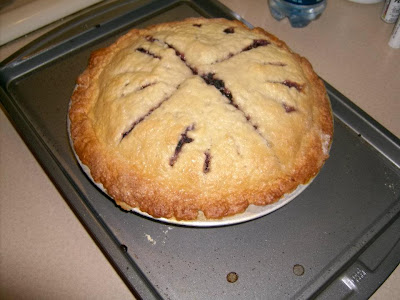 Mulberry pie! YUM! There's nothing like harvesting your own fresh mulberries and then making a pie with them. Wow. 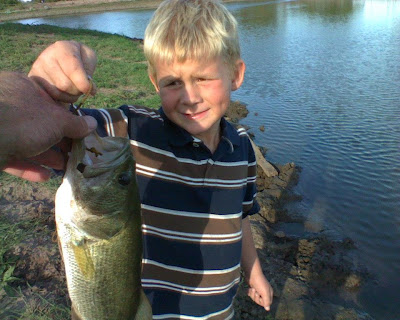 Brady and his first fish! He made sure his grandma, who cooked them for us, cooked his separate so he knew he was eating the one he caught :) 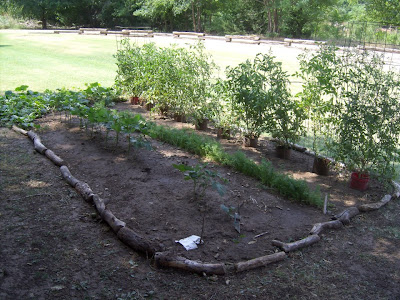 Our little garden. Tomatoes, cucumbers, carrots, okra, onions and radishes. I hope to expand it next year.
Posted by Burbs to Boonies at 1:23 PM