Why I think kindess should start with bugs!

We have a rule at our house. If we're not going to eat it, and it's not a threat to our family, animals or home, we leave it alone. A time or two Brady looked as if he was going to harm a ball bug or beetle and I say, "Are you prepared to eat that? Because if you kill it, you'll have to." I'm not certain I'd actually make him eat it, but he seems to think I will, so he stops.

And since those few incidents, I've seen him save ball bugs that were drowning and talk to bugs like they were cute little people. He sees that I value those creatures, no matter how small, and so he has started to as well. He looks to me for how he should see the world. He may someday reject some of my views and ideas in favor of his own, but if what he sees from me makes sense to him, he will follow it.

Because here's the thing. Our world is lacking in kindness, gentleness, compassion. And there's an abundance of disconnectedness, indifference and callousness.

It's my theory that if you can teach a child to be kind to the smallest, most seemingly insignificant creatures there are, then how much easier will it be for that compassion to translate to humans. If we're kind to the smallest things, then maybe we can be kinder to each other.

Now, there are of course very good reasons for disposing of termites, rattle snakes in your garden, fire ants in your back yard, brown recluses and black widows, a mosquito or tick on your arm, flies and cockroaches if they're in your house. But even then, if we see those same creatures out in the country, I tell Brady to leave them alone. They have their own purposes. The wasps we're so scared of, they pollinate the fruits and vegetables in our garden. If we killed them all, we'd have no produce. The spiders we fear, they keep the mosquito and fly populations down. Snakes keep rodent populations down or we'd be invaded by mice and rats. Those creatures serve a purpose too, but we don't want to be overrun with them. Bats, which I just absolutely love, are probably are best natural defense against mosquito-borne illnesses.

Even poison ivy, which makes me absolutely miserable, I think was put on this Earth for a reason. I think God put it here to teach us humility.

And that brings up another point. I tell Brady that all living things are God's creatures. And if I truly believe that, then how can I disparage any of them? That doesn't mean I do not defend myself, my family and my home, and also eat those things I need to live. But it means I show a respect for them even if I have to kill them.

And if I see that same creature somewhere else, where it does not need to be disposed of, I can appreciate it for the unique roll it plays in God's natural world. They are truly fascinating to watch. Brady and I have often been amazed at how insects live and build and interact.

We could use a lot more compassion in this world today. Every creature on this Earth is connected. What happens to one affects another. But these days, many people can't even see their connection to other people. So if we start with the tiniest, simplest beings, then maybe that empathy will defy gravity and trickle up to us big guys.

Here are pictures of some ants Brady and I watched for about 10 minutes in Florida as they group-carried a dead wasp across a wall, around a corner and into a hole in a building: 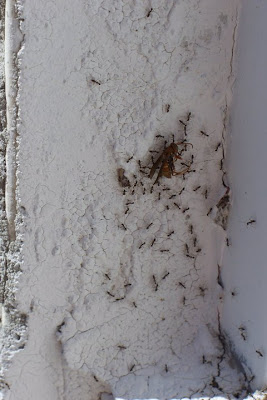 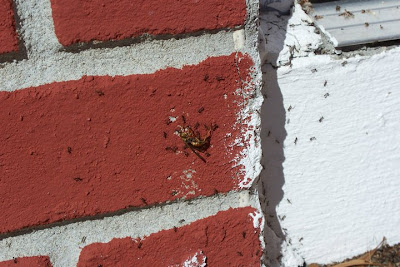 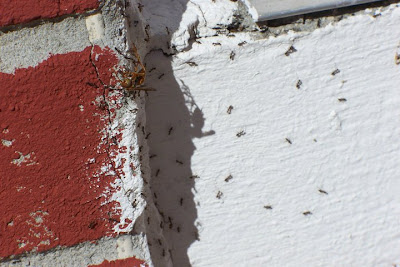 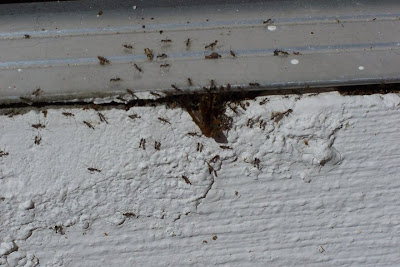 Posted by Burbs to Boonies at 9:50 AM