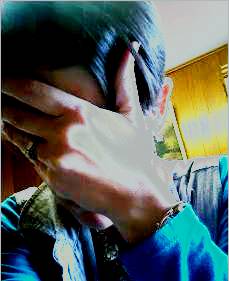 As a volunteer for Postpartum Support International, I get phone calls and emails from moms who are going through postpartum depression.

They sound as desperate as anyone I've ever heard in my life. And I know their desperation as I have experienced it myself.

I think it's one of the loneliest things you can go through. It is scary and confusing to everyone around you and it's very hard to articulate to someone who hasn't been through it.

Not only that, unlike depression that comes from health issues or divorce or death, no one expects it. They expect you to be the happiest you've ever been.

I was very fortunate to have been in Columbia, S.C., when I went through it. It is a large metropolitan area and I had access to a support group and counselors who specialized in PPD. I met other moms who had gone through it or were going through it. I had many free or inexpensive places to go and get Brady and I out of the house.

I'm learning that here in Kansas - particularly the whole southern and western portion of the state - that is just not the case.

I talked to a mom whose general practitioner would not prescribe her medication while breastfeeding, though some meds really are considered safe. She had to look elsewhere, more than an hour from where she lived just to find a practitioner who was well versed in the options.

Another Mom lived in a town of 10,000 and could not find anyone who could treat PPD. I've given her numbers in several major cities, the closest of which is at least an hour because she was in such desperation to get help from how she was feeling and her family doctor was less than supportive.

These women need understanding and options. They need someone who really gets what they're going through. It is a very unique, very specific, very acute type of depression and one that is crucial to get under control.

It makes me sad they have such a hard time finding proper care. So I will say, if you know of someone going through this, get them to reach out to anyone: spouse, sibling, parents, friends, pastor. I say the last one because if you can find no one else, your pastor can call on the Word of God to help. Just anyone who can help them get the help they need.

And while they're reaching out, suggest they contact PSI to find a volunteer in their area, someone who can do the researching for them or who may know of resources they wouldn't be able to find easily. It's lonely enough without having to go it alone.
Posted by Burbs to Boonies at 7:49 PM