How a kid's passion can fuel education

So, Star Wars has captured Brady's imagination more than anything I can remember for a long time, maybe ever.

I have mentioned previously that drawing is not Brady's favorite thing. But he drew this during church. It is the scene when the Emperor is shooting lightning at Luke Skywalker and Darth Vader turns to the good side right in that moment and saves him.

Wow, maybe that's a good thought for church. I like that he is showing emotion in the faces and even wrote a word! 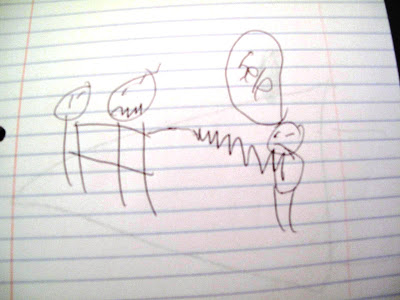 He is using Star Wars in his drawings at school and in sentences. It is motivating him to do these things he's not crazy over.

He told me this the other night after taking a LOOONNNGGGG time to brush his teeth:

"I'm sorry. I got distracted and was pretending that the toothbrush was C3PO and the lid to the toothpaste was R2D2."

And here he is with a Giant Lego Star Destroyer he made chasing a Mini Lego Millennium Falcon. The top part of the destroyer is the command deck! 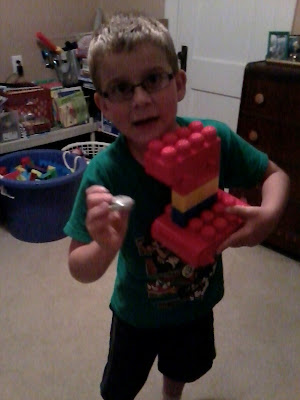 I am starting to realize his passion for this one thing - and who can resist an epic space battle of good vs. evil - can transform how he looks at things he doesn't even like, like drawing or reading or writing (he'd be happy if school was all math and recess).

Next up in this saga: I'm going to order those old Star Wars books I used to read and we'll read them together. If he sees that there are exciting things to read in the world, he just may change his opinion about it.

What inspires your children? What passions do they have that could fuel their education and learning?