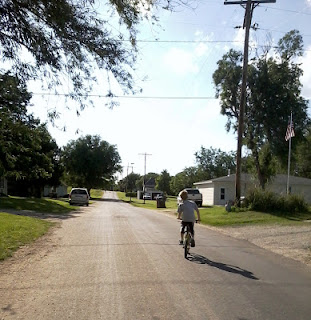 This is the first in a new series here, called:

It's my goal to include little slices of life from our less-than-1000-person town. Things are different here. Life is slower. It's quirky.

We ride our bikes through town a lot. Some weeks every day. And we never know who we'll see.

Most times we hit our garden down at my father-in-law's old home place, then the park, sometimes get a pop on Main Street, sometimes down to the river, and usually end up going to see my mother-in-law at the other end of town.

Mostly recently, we encountered some 4th-grade school friends, both of which Brady met his very first night in this town 2 years ago. That day the girl had said some not-so-nice things about the boy.

Brady on this recent night: "Wow, I didn't know you guys were FRIENDS!"

The girl: "He's going to put that frog in the storm drain!"

Boy holds up the frog in his hand, mere feet from the drain! ACK! Swift intervention was needed!

Me: "Oh honey, please don't do that. It'll die down there. It can't get out. It's one of God's creatures too, you know (he goes to our church, I thought that might help). Why don't you go put him in that ditch over there. I'll bet he'd love that."

That seemed to work as they headed off to the ditch.

No sooner did we break off from them, we ran into Brady's sitter's brother, also in 4th grade. Brady and this kid act like brothers themselves sometimes and argue. Then they usually make up by swapping their gaming devices, a Kindle for a DS. So boy, isn't it?

The kiddo rode up to us on his bike.

Him, very serious: "I just finished my homework and I had to ride off all of that brain stuff."

As we ride away, Brady: "You know, he's WAY different at school than at home. At school he's very serious and stern. At home, he's just crazy!"

Posted by Burbs to Boonies at 8:35 AM

Email ThisBlogThis!Share to TwitterShare to FacebookShare to Pinterest
Labels: Life in a small town, Life in Midwest America, Small-town Tuesday