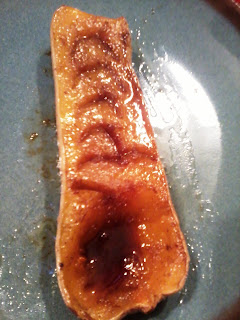 Because of so many years living with an undiagnosed egg allergy which basically induced nausea or vomiting, my kiddo is understandably picky.

In many ways, this is not bad. He is such a healthy eater. He likes whole food: meats, dairy, whole grain breads, potatoes, fruits and veggies. He wants to KNOW what he's eating without a lot of stuff mixed together.

His preferred sweets are straight chocolate, rice krispie treats, jello and pudding. Not the worst of the worst.

However, trying new foods is also crucial to a healthy relationship with food and eating.

To minimize fusses during the week, we have a scheduled new-thing day. And that is Try Something New Thursday.

This week it was butternut squash, the only one that actually survived my garden this year though four more big ones are now growing. Below is the recipe.

He liked it so much that, I kid you not, after he tried it, he put his hands together and said, "Dear God, please let the rest of the squashes make it."

Told me it was "DEE-liscious!" Here goes:

This recipe comes from here, though I make a few changes to it, the most major being butternut instead of acorn squash. Adjust the measurements based on how many squashes you have.

1 medium to large butternut squash
1/3 cup honey
1/4 cup butter or margarine, melted
1/2 tsp salt
1/4 tsp cinnamon
(recipe calls for ginger, but I did not use it)

In a bowl, combine honey, butter, salt and cinnamon. Cut squash in half, discard seeds. Fill the bowl end of the squash with the mixture. Take a knife and cut several holes in the long part of the squash and brush some of the mixture of it, allowing it to seep in.

Place in a greased baking pan. Cover (I used foil) and bake at 375 degrees for 1 hour or until squash is tender. Uncover, bake 10 minutes longer. While baking, periodically lift the foil and brush the mixture from the bowl part across the long part of the squash again.

The squash will be so tender you can just scoop it out with a spoon. It's almost like eating pumpkin pie, yum, yum, yum.
Posted by Burbs to Boonies at 3:00 PM