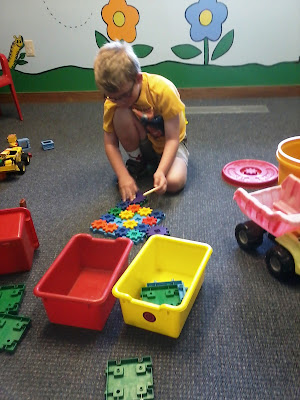 The best thing about summer is being able to reconnect as a family.

During the school year, there is such a hurry-hurry, keep-moving-forward momentum to our days and the pressure of worrying about behavior issues.

But in the summer we just get to "be."

And I always rediscover just how cool my little guy is. To the left here, we are at the latest in a long line of doctors over the years. We changed to one much closer to us and went through the hour-long initial appointment where I explain all our troubles again.

Brady is such a good sport at these, but mostly he loves investigating whatever new toys the new place has. He made a gear assembly he called a "clock" and then stuck a little wooden peg in it so it wouldn't turn. Ha! Little engineer.

He's also been giving the Vulcan symbol and saying, "Live Long and Prosper," to everyone. I just can't believe he really does embrace my love of Star Trek! Yay! It was too much to hope for. 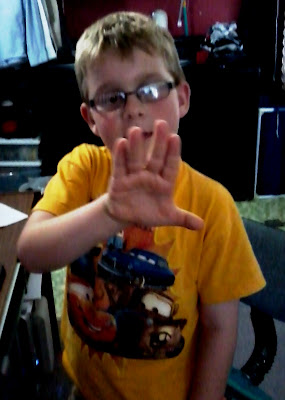 But yesterday in the car, he did it with both hands and then told me, "Well, now that I've been able to do this for 3 days, we're not so impressed anymore."

Yesterday he also befriended an adorable 2-year-old girl in Spangles and they shared a booth alone (flanked on either side by her parents and us in other booths, LOL) while they ate and he showed her how to use his Vreader. He has such a kind heart. He tells me he wants to be a teacher and I think he'd be a good one.

And my favorite thing he's said lately as we were on the way to the office to work for the day. I bring his Nintendo DS but he isn't allowed to play it until we're at the office.

I also brought along a backpack with his Vreader, games, calculator, books, pen and paper. I told him during the drive he could pick whatever he wanted out of there or we could just talk.

He didn't miss a beat and said,"I'd want to just talk to you!"

And we did. All 45 minutes of the drive to the office. Those are my favorite times of the summer.

Posted by Burbs to Boonies at 7:09 AM