Food and kids as individuals 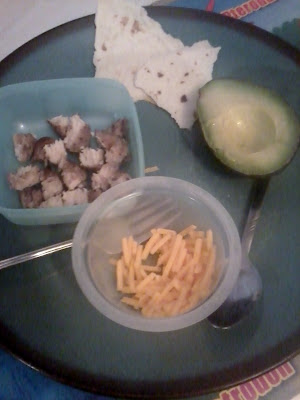 To the left is Brady's dinner the night we had fajitas. Ours of course were rolled up in tortillas with chicken, melted cheese, diced avocado and hot sauce.

The thing is, Brady can't stand melted cheese and he really doesn't like stuff all mixed together.

I know a lot of people follow the eat-what-you're-given principle and I get that. The world won't change things up for you just because you want it too.

But on the other hand, I know that I hate having to eat things I don't like or having very little on my plate I want to eat.

Also, Brady's long-undiagnosed egg allergy has made him VERY particular about food mixed up together. Until he was 4, he never knew what would make him nauseous or cause him to throw up.

So... I don't mind giving him something prepared just a little different than what we have. If I'm making shepherd's pie, he gets separate meat, veggies or fruit, and mashed potatoes, just not all mixed up. Grilled cheese? Bread with peanut butter, sliced cheese, veggies and tomato soup.

To open him up to new foods, we do Try Something New Thursdays and he helps with gardening, then loves to try what he's helped to grow. He's seen Jason hunt and is open to trying all the things he brings home: dove, deer, wild turkey, wild hog, even bull frog if Jase gets one this year!

These activities have really paid off. In recent weeks he has tried cajun sausage, pepper jack cheese, blueberries and smores. None stuck, but he'll be likely to try them again and get used to them over time.

Like I said recently, in the U.S. we have such a funny relationship with food, I hate to make it a forceful unpleasant experience. And I want him to know he is an individual with different tastes than mine and I am willing to respect that. I won't prepare a whole different dinner for him, but I can change up what I'm making to fit him.

And who doesn't want to be treated just a little bit special sometimes?
Posted by Burbs to Boonies at 12:04 PM