Now, The Prize Store sounds like one of these wonderful freebie sites I'm always talking about, but it's not! It's something we do in our very own home. 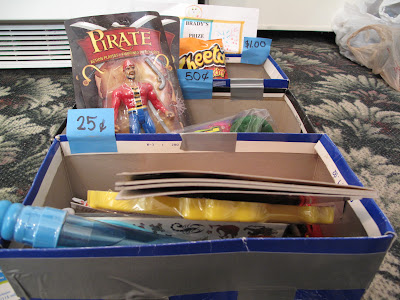 I found myself in search of a reward system that would work for Brady. Lots of sites had ideas for having a kid "earn" points or coloring part of a chart when they did something well, basically working toward some goal in which they would receive a reward. The idea is to encourage positive behavior in a pro-active way, rather than focusing on the negative unwanted behavior.
My kiddo has never been terribly motivated by rewards charts. To some degree, but he loses interest quickly and the motivating factor is gone. But he does love the idea of points and money and keeping track of such things. He revels in math. So my idea was this: I bought a pretend register drawer and set of pretend money at our local Dollar Tree. 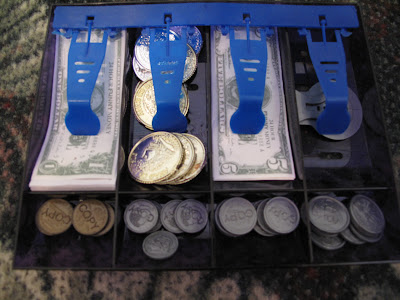 Then I taped 3 shoe boxes together - one with items costing 25c like Tootsie Rolls, Smarties, real quarters, bubbles, stickers, tattoos; one costing 50c with little toys, bigger treats like candy bars, Cheetos, a can of pop; and one costing $1 with real dollars, coupons for extra time on the computer or playing Pacman at the local restaurant to use whenever he wants, a new calculator, a bell for his bike, and the ULTIMATE - a coupon to stay up until 9:30 on the weekend! I called it "Brady's Prize Store" and keep it well stocked. 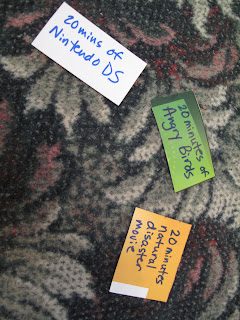 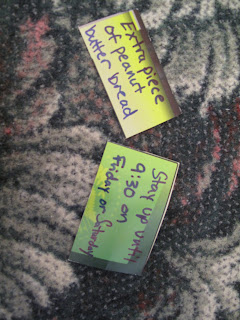 So each day, he has the potential to earn $1.30 of the fake money: 15c if the morning goes smooth, 15c if bedtime goes smooth, $1 if he has no problems at school, after-school or bus ride, and then money gets tacked off for each incident at the different locations (this also helps us reinforce school expectations). If he has just one incident in a day, it drops from $1 to 35c. He argues that's not fair, but I tell him having no problems anywhere is like the Grand Prize and something he has to work hard for.

At the end of the week, neither of us can wait to burst in the back door and have him count his money, exchange dimes and nickels for quarters, quarters for 50c pieces (pirate gold from his Halloween costume, LOL) and 50c pieces for $1 bills. We recently introduced a $5 bill but he has to do REALLY well all week to get that and I'm happy to say he has.

Then he gets to spend his play money on whatever he wants out of that store. It's so much fun for both of us. It's his own little store, made just for him, and he really wants to have lots of money for it at the end of the week. It's just involved enough to keep him interested and it gives us both something to look forward to, even if we've had a bad week. And it puts the responsibility of how much he gets to buy on his shoulders, not mine. Whew! I sure hope it keeps working!

The best part is, I hope, that it can grow as he does. I can always put new things in there to surprise him. And it would work with whatever is important to a particular kid. Just my little idea. I'm sure someone else somewhere does it too, but I was quite happy to think of it and introduce it at our house!
Posted by Unknown at 1:15 PM