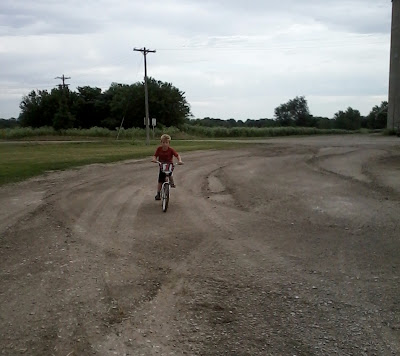 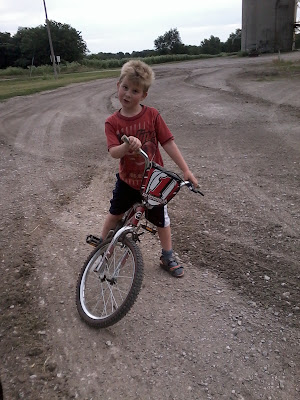 We got Brady a bigger bike for his birthday back in November, but though he liked the idea of it, he was  not ready to tackle it yet. I hadn't really thought about the fact that it would be a different process getting onto and then balancing on a bigger bike.

Plus he was just so used to his other one.

So after a few tries, he abandoned it for his smaller one. For months. Sigh.

I was just a tad disappointed but decided he'd hopefully come around in time. We talked about it off and on.

"I'll ride it when I'm 7 and three-quarters," he told me. Okay, well at least we had a goal date in mind.

The other day he made a realization about his small bike. It was starting to cause him issues. Only one hand-brake worked and not all that well. It seemed like he was crashing a lot (nothing major, just he's so big for it!).

As he zipped by, he said, "These brakes are amazing!"

Last night he told me at least twice, "Thank you so much for this bike. It's amazing. I love it."

After 7 months, he came to the conclusion all on his own that he was ready for it. He has such a sense of accomplishment about that.

It's hard to give them time and space to figure out new things, but I think a lot of times it's worth it.