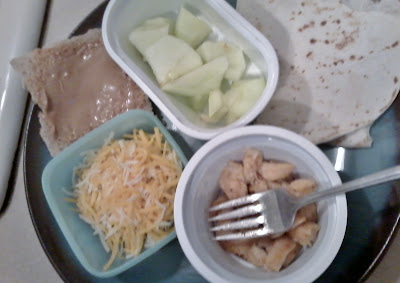 This was Brady's dinner the other night when we had chicken enchiladas. The final product for us was cooked in cream cheese with green chiles and tomatoes and green enchilada sauce.

But for him, I gave the chicken, cheese and tortilla, and added apple.

A friend asked me not long ago how did I handle dinner time with Brady, who is severely allergic to eggs. She has a child with sensory issues and meat texture is a problem at dinner, and its made harder when there are other kids in the home asking why they don't get special treatment!

I don't have that particular issue since Brady is an only child, but it did give me pause about how we handle his dinner. I don't want him to think the world will metaphorically make special meals for him all his life. But I do recognize this physical difference and that is why we do Try Something New Thursdays and I also focus on the fact it has made him a more healthful eater in general.

Not only is he allergic to eggs, but the trauma food gave him during his first four years - anything with egg made him throw up or become very nauseous and we had no idea why - has made him pretty picky. He cannot stand anything that has a lot of stuff mixed in it. I don't care how many times I tell him there is no egg in it, those feelings of anxiety as it relates to food are ingrained. And at times it is warranted, as I almost gave him a dish with egg in it a few weeks back and I'm SO cautious about it usually!

He is also strong willed. This could become a nightly battle and I think that would push him away from a healthy relationship with food, so I won't do it. What I will do is help him eat healthfully within the confines of whatever we're eating for dinner that night. So here are some ideas for dinner with a picky eater or an eater with food allergies.

Explain to any other children that the allergic child has a physical condition, not unlike diabetes or the flu or something else. If a child is sick, you don't give them anything but crackers and sprite. If they're diabetic, sugar has to be controlled. Food allergies or even sensory issues are no different. The food in question causes a negative physical response that affects the health and life of that person and it has to be addressed.


Keep it close to the same

Serve what you can of the same meal to the allergic or sensory-stressed child. It may help the other children to see the one in question has most of the same meal. You don't need to cook an entirely different meal for one kid, but you can adapt it to their particular issue. If we're having deer pizza, I keep some of the ground deer off separately in a bowl, give him cheese, spaghetti sauce, bread and veggies on the side. (He also hates the texture of melted cheese and gags on it). It's the same meal, just arranged differently.

Break the meal in to component parts. In our case, a meal all mixed together is a big problem. But I can't expect Jason and I to eat just what Brady eats. So... I look at what we're having all mixed up: chicken, cheese, tortilla, veggies. I can cook the chicken and keep some back before it is made into enchiladas. Add cheese, tortilla and some kid of fruit or veggie and it's mostly the same.

Keep the problem in mind

Though you don't cater your meals to one child, you can keep that child's unique needs in mind when planning meals. If I see a recipe with egg that would make it difficult to use a substitute, I move on. I do not collect recipes that would require me to use egg because I want him to feel like he's able to eat what we eat, he's not left out, his needs are considered. I also now do not keep recipes that involve cream of chicken soup since the above-mentioned near-egg incident involved cream of chicken soup. I'll either substitute cream of mushroom or just forget it.

There are lots of substitutes for egg: applesauce, mashed banana, oil, cornstarch. The same is true for gluten, milk and most allergens. I've been able to make a lot of recipes for us as a family that normally would include egg but instead have a substitute, things like meatloaf, meatballs, muffins, cookies, lasagna, waffles, salmon patties. It can be a challenge, but it's fun too!

If the issue is sensory or texture-related, or whatever you're serving doesn't lend itself to breaking up into component parts, think about a similar item. If the problem is meat, can you change the texture? Can you grind it up in a food processor, or chop it up thin? If the meat you're having is beef, can you give slices of lunch meat instead of chunks of roast? If it's chicken, would canned chicken work better? They're still getting the same meat, just in a different form, again in recognition of their unique physical situation. Can you find something that is comparable?

It's hard to have to compromise at meal time, something that should be so easy, right? You cook. They eat. But when you are dealing with food allergies or sensory issues, it's just not that simple. With a little research and planning and family discussion, however, I think you can make it work with minimal fuss. Good luck!
Posted by Burbs to Boonies at 7:35 AM