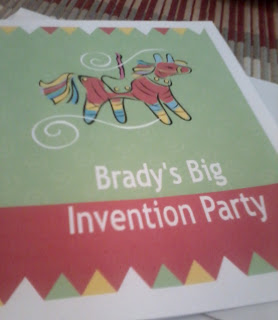 I still can't believe we're having an "Invention Party" simply because Brady thought it up and wanted to do it.

But I'm so happy for him to see an idea of his grow into reality. I'm also happy he feels so comfortable inviting half the universe!

No kidding, we're driving down Main Street and he sees the scrolling marquee sign at the telephone company and says, "Oh, maybe we can put the invention party on there."

I said, "No! We're not inviting the whole town!"

It's cool he sees things so grandly though. I have no idea how it will go, I only know he's excited, at least a few kids have said they'll come and at the very least, it will be a fun way to get together outside of school and let off some end-of-school-year steam.

The weather looks good. We're almost done with the stick house. We have boxes of recycled household stuff to use. And maybe he'll remember one day that whatever he puts his mind to he can make happen.

Pictures to follow next week!
Posted by Burbs to Boonies at 12:17 PM