I almost gave him egg! YIKES! 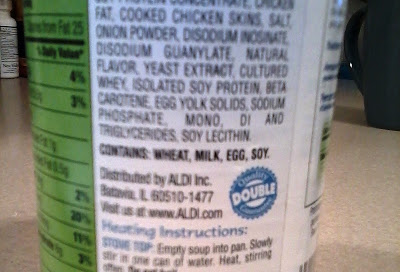 You know, we try SO very, very hard to keep from giving Brady anything with egg due to his severe allergy. He tries hard too. Occasionally it happens by accident. It happened twice last year, both times at Easter.

The first time my mom had some cream eggs. I checked the ingredient warning information and it said only milk and wheat, I think. Did not mention egg. Usually those bold warnings are very accurate.

But as he took a bite, I began reading the actual ingredient list. He had swallowed maybe two bites before I saw EGG ALBUMEN in the list and dramatically stopped him, but he threw up 20 minutes later on the way home.

Next, he participated in an egg hunt at school and the plastic eggs had candy in them. He ate a cream bunny and threw up that afternoon when he got to day care.

Well just this week, I made a wonderful chicken pesto recipe with cream of chicken soup. Now typically we use cream of mushroom and there is no egg. Brady has had dishes made with that many times. It is so similar to cream of chicken that I neglected to double check. I assumed it was the same, just fine, no egg, same as the mushroom soup.

I put some of the chicken on Brady's plate and he immediately said, "What's that?" pointing to a little sauce on the chicken. I said, it's just some spices in a sauce called pesto, it's okay. "It looks weird," he said.

Fortunately I followed his instincts and checked the can. What do you think. EGG. See the photo. I told him, "Kid, I am so glad you asked me about it. You were right to question it." I was very thankful for his natural caution as a night of throwing up would have been no fun for anyone.

So if your kid has allergies, stay vigilant! And listen to your - and their - instincts.
Posted by Burbs to Boonies at 8:11 AM