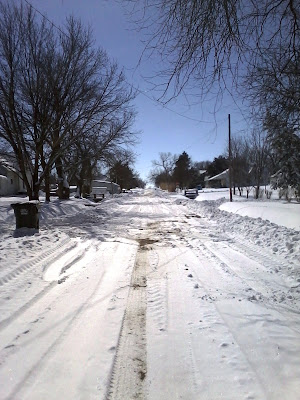 Out front here in town doesn't look too bad, but from what I'm hearing the country roads are REALLY, REALLY bad with big snow drifts and people getting stuck.

Brady of course shouted, "Woohoo!" He's very happy about getting an entire Snow Week. I don't ever remember getting that much time off as a kid.

I grew up here, but spent the years from 1995 through 2011 elsewhere. Except for 1 year spent in Salt Lake City, Utah, (in which it started snowing in October and didn't quit until March, I would just swear to it!)  snow was practically non-existent in my life.

And Florida, forget it!

So I am amazed by the power of mother nature. I heard there were 75-mile-per-hour winds during the storm yesterday. That's a Category 1 hurricane. I heard other states were watching out for tornadoes. I heard rumblings of Thunder Snow somewhere too. What a deal.

We'll have to venture out today to get bananas and toilet paper, but thank goodness we didn't lose power and hence our food, and thank goodness we were fairly well-stocked ahead of time. Stay safe out there!
Posted by Burbs to Boonies at 7:33 AM