Drawing has long been considered a favorite kid activity. Well, most kids.
Not mine.

Brady has never liked coloring or drawing. Ever. Not one bit. In fact, if he is not forced to for some reason, he will not do it.

That'd actually be okay with me for the most part because his talents lie with math, science and spelling, more concrete things.

But there are a couple of reasons I wanted to build his confidence in this area.:

So, I told him this summer we were going to work on drawing. He could sit side by side with me and we'd both draw. 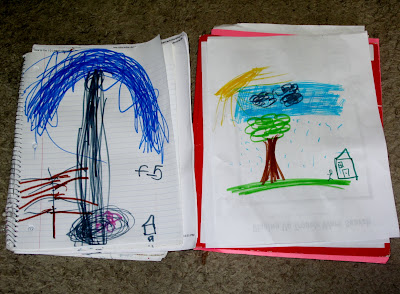 I had no idea what to expect but it has actually worked out really well. To the left is the result of our second "drawing session."

The first we drew a few simple things and I talked to him about the power of using different colors and taking our time. I also explained that there is no right or wrong in drawing. It's however the individual sees things.

On Try #2 I said, "Well, let's draw a picture like in A Bug, A Bear and A Boy Paint a Picture." This gave him some idea to go by and referenced a book he likes to read.

The picture in the book is of green grass, blue sky, a tree with a yellow bird. So my drawing is on the right. To show him we could add our own touch, I put gray clouds and rain in the sky.

He ran with that, made a stormy sky and an F5 tornado (complete with a swirling debris cloud at the bottom) a tree stripped of leaves to the bare branches and a guy in his basement. Can you tell we live in Tornado Alley in Kansas? He told me my picture was the guy earlier in the day. Ha!

I was actually very impressed that he made his own scenario. See, kid, that's what you can do!

The next try he said, "Let's do the opposite. You draw the storm and I'll draw the nice day." So we did. He used different colors all on his own and drew with much more confidence. Here's his work: 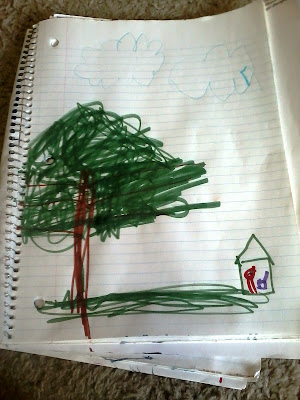 I love his fluffy clouds, the full green tree and that's him inside playing on the computer.

He said, "Wow, I really am good at this." And that's the moment we moms all wait for.

We'll keep going with it and build that confidence even more. Oh, and my picture had a lightning bolt catching an apple tree on fire. He loved that!

But if there's an area your kiddo struggles, maybe just sitting down and doing it with them and talking through it can help. It may never be their favorite thing, but they can get through it and discover their own potential.