The nail in the coffin of the old me was the deer heart. Nearly the size of a football, it came from a doe my husband shot earlier that day, ultimately giving our family more than 80 pounds of nice, lean meat. He put the heart in a pan of water in the sink and then casually said, "Let's cook it." "Cook what?" I asked and paused as it sunk in. “The heart?"

And then I realized he meant me! Oh boy. Now, I had begun experimenting with different foods when we got married three months before, both at the age of 40, deer included. But the heart? This was going to be hard to swallow, literally!

But he was right. Why not? Wasn’t I always saying we should take personal responsibility for the food we eat, that we shouldn’t waste anything? Here was a protein and vitamin-rich food and I could think of no good reason not to eat it. “It’s gross!” just wouldn’t cut it.

So the next night I stood at that same sink, scrubbing the insides of this heavy dark red organ, a disgusted half-wrinkle stuck on my nose. I cleaned its chambers, stuffed it with dressing, seasoned it, wrapped it in bacon, and gradually sensed a moment of permanent personal change come over me.

This girl who once lived in the middle of a town of 1 million people in a dinky apartment relying on mass-transit, who’d gone through a vegetarian stage and an organic stage and a not-tested-on-animals stage was in her house – on the very edge of a town of fewer than 1,000 – baking a day-old deer heart. TO EAT!
And it seemed right. It seemed natural and elemental and personal, as food should be. To my utter amazement it tasted fantastic, so the next time he got a deer, preparing and baking the heart didn’t faze me one bit.

It is my goal for Burbs to the Boonies to be about many things: the transition from city life to country life, life in a small town, learning to garden and hunt and gather, living off the land, building relationships in a close-knit community, getting back to the basics of life, cooking for food allergies, the power of prayer and gratitude, and many other things.

Thank you for being here. I'll leave this post with a couple of photos of our life. One of my son and I at a corn maze in October, one of my son's ride on a generous farmer's combine during harvest this year and sleeping with his teddy bear in the basement during a night of tornadoes in April. 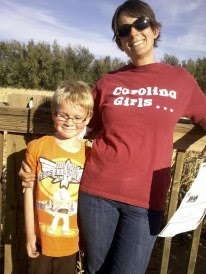 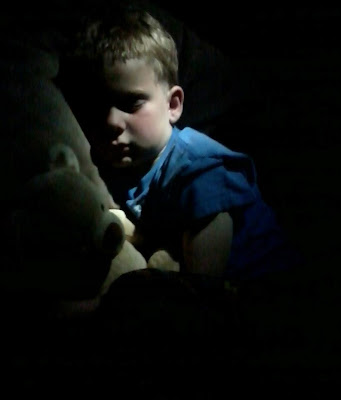 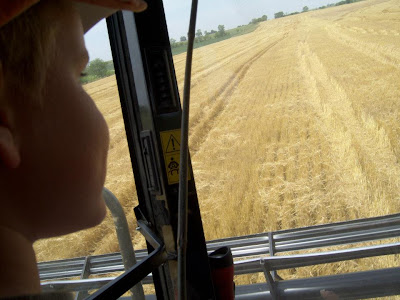