This post is a part of the Fantabulous Fall Favorites blog chain put together by a great group of bloggers. The theme this week is pumpkins. Be sure to check out all the great ideas shared at the end of this post!
This is what has been appearing in front of the grocery stores lately. I took this photo in front of a Dillon's store, which is part of the Kroger chain. Aren't they beautiful? 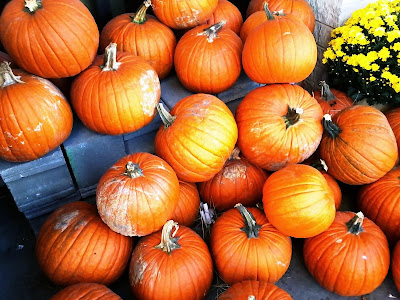 And not only are pumpkins plentiful now, they are starting to go on sale. In a few weeks, they'll be really cheap! I, for one, plan to stock up and I'll tell you why. Pumpkins are good for you! 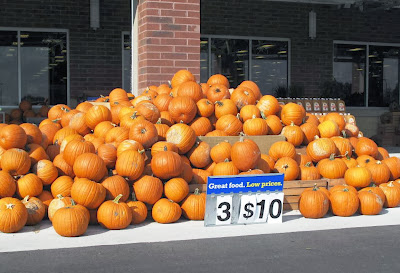 I like pumpkins in general because they are so versatile - pie, soup, muffins, pancakes - on and on. And not only that, their consistency makes them a good substitute for egg which I always need because of Brady's egg allergy.

I had the idea they were healthy, but just recently did a little research to find out just exactly HOW healthy.  Here's what I found out about the nutrition of pumpkins as well as their interesting history:

I hope this little research project has inspired you to go out and stock up on pumpkin as well. It's a far more interesting plant than I ever knew. Happy Fall!

Still want more? Head to our Fantabulous Fall Favorites Pinterest Board!
Posted by Burbs to Boonies at 3:00 AM