Are we in for a harsh winter?

I heard a few weeks back that the Farmer's Almanac this year is predicting a colder-than-normal winter. Oh boy.

There was the devastating and freakish snowstorm that hit South Dakota the first week of October, dumping a record 4-plus feet of snow.

And I can tell you we've already had two very unusual snow events in Kansas this year. It snowed in early May, which is pretty rare for us, and now it snowed for several hours this past Friday, October 18. According to this article at the Great Bend Tribune, a Wichita meteorologist called it "definitely an early snowfall."

That means we've technically only had a 4-month break from snow this year and that on the heels of several previous years of mild winters, severe drought and record stretches of 100-plus-degree days.

Now, it's Kansas, it's the Midwest, and any Midwesterner will tell you, "You don't like the weather? Just wait awhile." It's always changing and unpredictable. But I have an idea we're in for something more this year. There's just an ominous feel to the air.

Here's a quick photo I snapped during my travels Friday. Everyone I've talked to who has lived here a long time was just shocked and caught off guard. I wonder what's in store? Lucky for me it's in God's hands and I can't really do much about it but pray :) 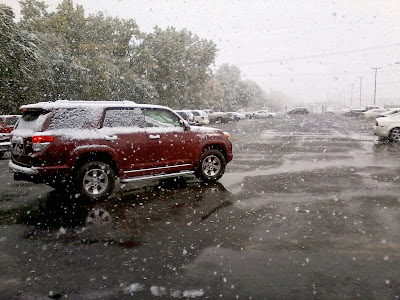 Posted by Burbs to Boonies at 1:12 PM