Driving conditions can get a little challenging in Kansas at times, and I was lucky enough to experience four unique events within 24 hours. Just thought I'd share them.

I went to my Hunters Safety field day Saturday which was way out in the country an hour away from where I live. Parts of my area got up to 5 inches of rain in a short time Friday night (I'll tell that driving story in a moment), so I got halfway there and encountered a sign that said, "Road Closed Due to High Water."

I sat there for about 2 minutes mulling over my choices. NEVER cross water on a road. That was my first thought. Luckily, I had enough forethought to print maps for 2 different routes, so with a bit of backtracking I was able to get where I was going. 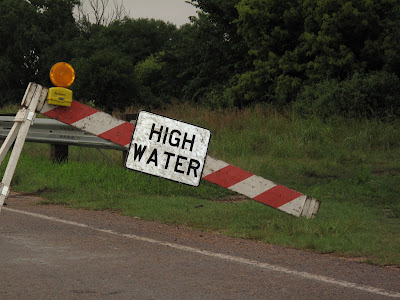 I was trucking along once I got on my new route when ALL OF A SUDDEN I had to slam on my brakes for what appeared to be four small people crossing the road. Nope, they were just a mother wild turkey and her three babies. But, dang, they're big!

The Hunters Safety coordinator guy told me an alternate route that was supposed to be better than the Mapquest route due to mud since, as I said above, many areas got huge rain.

Well... it still wasn't enough for my little 2001 Corolla. I was a mile away from the place when - whoosh - my car just slid to the right and plunked over the edge of the ditch in the middle of nowhere.

A phone call later and 3 guys with 2 trucks came to rescue me. 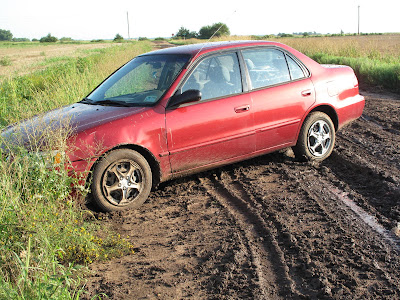 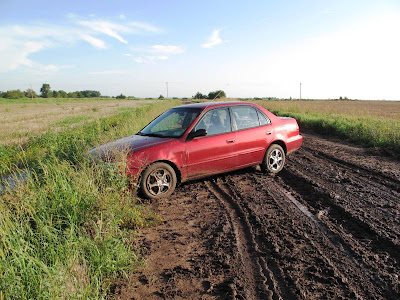 Driving in a hail storm

Lastly, I am so grateful for my husband's calm demeanor. He and I and his parents were driving home Friday night from dinner when the storm hit. We had no idea such a fierce storm was expected. To be honest, I don't think anyone did.

As we drove at 9:30 at night down a deserted pitch black country highway, hail began to pelt our car. It sounded like someone was throwing rocks at the car as hard as they could and I knew, just knew, a window would shatter (but it didn't). My mother in law and I held newspapers between us and the windows just in case, and I heard both of us praying at one point.

Not only that, it rained so hard my husband literally could not even see the lines on the roadway anymore much less whether anyone was coming in the other lane. We had to pull over at a farm house and wait it out, and let me tell you, he's not a wait-it-out kind of guy. If he pulled over, you know it was bad. Here are a couple of the dents the car had after that drive. 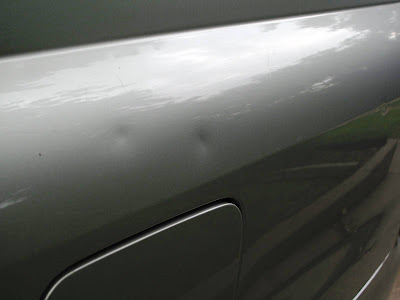 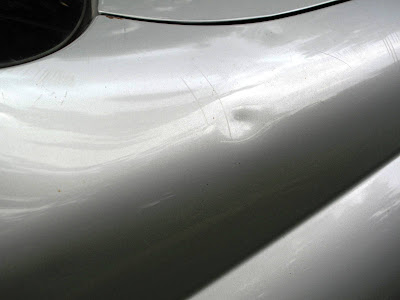