I didn't really anticipate having my kiddo get a bank account at age 7, but he is SO interested in the idea of money that it just seemed the natural thing to do. He's been having such fun going to the bank and exchanging smaller bills for larger ones, and the time came for the next step.

He's been "collecting" money in a way. He adores numbers and so nothing is more fun to him than counting how much he has. He doesn't use it for much.

A few quarters for Pacman. He gave both Jason and I a dollar bill as a Christmas present and when my mom brought the ENTIRE Harry Potter series over for him to watch during the course of a few weeks he gave her a dollar out of gratitude, unprompted. His dad got $5 for his birthday.

Beyond that he will take a few dollars to buy something special at the store or occasionally considers using some to buy a used Ipod on Ebay, but usually he decides he doesn't want to part with it. For the most part, he just likes saving it. Now he gets his very own bank statement where he can watch his savings grow (Update: he got 10 cents interest. Not much, but it's an introduction to the idea).

Just look at his face when he's signing his name, his first ever signature. He seemed so proud to have his very own account. I hope by starting early with the idea of money, it will help him be a better manager as he grows up. 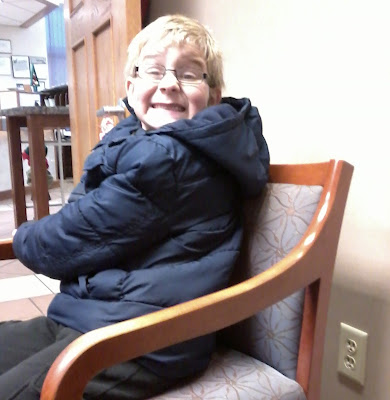 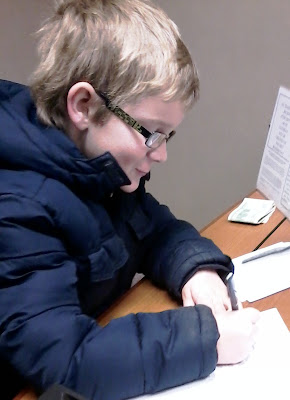