I don't know if Brady's entrepreneurial spirit is because we have a small business and he has seen us buy and sell, but he came up with the idea of opening his own "crystal store" and then worked out the details.

He's been given various rocks over the years as presents, polished gems, you know, and he started with them and sorted by size. I've also given him calcite from my fossil collecting days. And he has collected his own quartz rocks from school and outside.

He charges $1 for the small ones, $3 for the medium ones, $6 for the large ones and has one that wants $9 out of. He came up with this pricing scheme all on his own and he carries them in a paper bag all contained in plastic Easter eggs.

So far he's sold a $3 one to my sister-in-law, my mom, myself and Jason, and over the phone talking to his Dad in South Carolina, sold him a $6 that I'll need to ship. That's $18! That kid loves the idea of making money! And he seems to like this way better than doing extra chores at home, LOL. So far he doesn't want to spend any of it. It will be interesting to see how this all plays out. In the meantime, here he is with his "store." 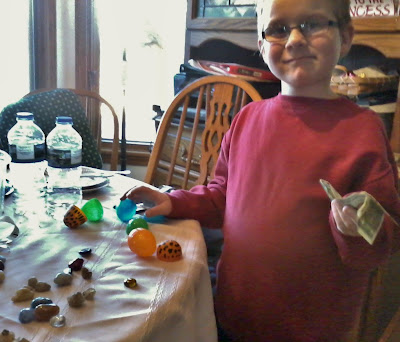