I always try to healthify anything I cook and I LOVE fried potatoes but without the oil. I think they taste every bit as good. Here's a picture: 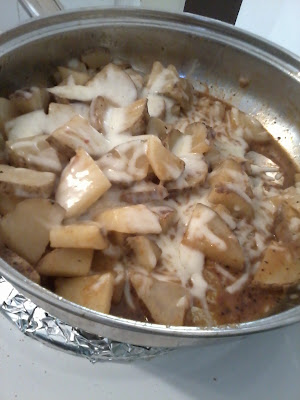 First, spray your pan with cooking spray. Heat it to medium-high. Add cut up/diced potato and then add about 1/4 inch of water to the pan.

Then I sprinkle on a good helping of seasoning. It used to be salt, pepper, garlic and chili powder. But now I just use that wonderful Head Country seasoning I like so much.

Stir it up, when the water gets too low, add a bit more. Basically you're steaming/boiling the potatoes, but as the starch in the potatoes leaches out into the water, it makes a kind of sauce with the seasoning that is SO tasty!

Continue adding water as it steams out until the potatoes are done, then turn off the heat, sprinkle cheese on and put a lid on until the cheese is melted.

It's every bit as healthy as a baked potato with just cheese, but tastes like fried potatoes! You could also add onions, green pepper, garlic, tomatoes, bacon, ham or even scrambled eggs.

Hubby was not too thrilled about another night of leftovers, so he said, "Why don't you make turkey hash?" His grandmother used to make it and I had never heard of it. So I went googling around and found several recipes. Some were in the skillet, some in the oven. Some suggested making patties and frying them. Some included vegetables and stuffing and gravy, some did not.

So I kind of made my own idea. We were so excited about eating it and it smelled so good, I forgot to take a picture until most of it was gone. 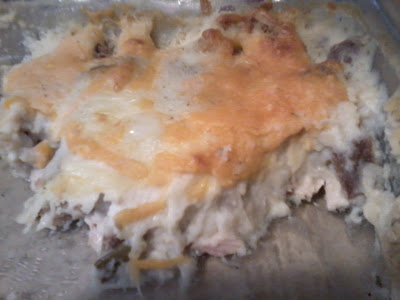 So here's what I came up with.

Get an 8X8 square pan and spray with cooking spray. In a skillet, heat up diced turkey (or ham or chicken, whatever you have) and leftover gravy (you could use this white sauce recipe).

Spread them in the bottom of the pan.

Take any leftover mashed potatoes (or other potato dish) and heat them up in the same skillet along with a little extra butter and milk. Then spread them on top of the other layers. Bake in the oven at 350 degrees for 20-30 mins or however long it takes for the potatoes to get a little crusty and starting to brown. Sprinkle cheese on top and bake another 5 or so minutes until the cheese melts and starts to get crusty. It's almost like a Christmas Shepherds Pie and it's good for breakfast too!

Posted by Burbs to Boonies at 9:24 AM