Another wonderful way to cook okra 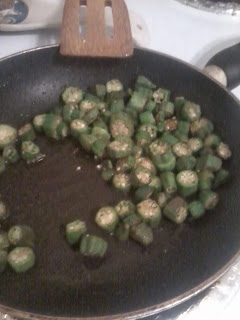 If you've been here for awhile and read posts about cooking and gardening, know I'm The Queen of Okra. I'm telling you, I think it is the most under-rated vegetable (or is it a fruit, I'm so confused since my pumpkin research) in the universe.

A lot of people outside of the southern U.S. just don't know about it or aren't inclined to try it. But I'm telling you, it is really tasty. I'll be researching its health benefits for an upcoming post.

Back in the summer, I posted this crispy fried okra recipe. Angel over at Household Savvy commented that sometimes she just sautes okra in the skillet. I just had to try it.

I've also stewed it, pickled it, put it in gumbo. Regina over At the Lake also posted this recipe on frying it with cornmeal only. I need to try that one too!

But the sauteing method turned out glorious. In fact, my husband - who grew up on breaded fried okra - said he prefers it this way because it is lighter. I have to admit I do too. But there's another reason I like it better.

It is SO much easier. Just slice it, toss it in the skillet with a little olive or canola oil, add spices like salt, pepper, garlic and Head Country and cook it for maybe 10 minutes. Then let it drain a bit on some paper towels.

It is awesome. Thanks Angel for the idea!