The Invention Party was a success!

On Dec. 6, 2012, I posted about Brady coming home with a big idea for an invention party and how he and two friends at after-school had made and given out a dozen invitations for THE NEXT NIGHT! I had to make sure everyone knew it wasn't going to happen then. I mean it was winter and a school night. There was no way!

He was crushed. He told me, "It was all for nothing!" with his head buried in his hands. So, we decided to plan it for the spring. I want him to know his ideas are important and not only that, that if he can think it up, there's a way to do it (and hopefully by doing this, he'll keep thinking up positive things with that creative brain and not destructive things! Ha!)

Over a couple of different weekends, we planned out the games - football, soccer, Frisbee, jump rope, baseball, tag, playing in the stick house, bubbles and of course, inventing. We planned the snacks - trail mix with pretzels, peanuts, raisins and M&Ms, cheese sticks and juice boxes. We decided who to invite. We planned the invitations. We picked a date.

We talked and talked about it, and it became such an exciting thing. A bonding thing. An adventure like we like to do.

Then this past Sunday - May 5, 2013 - exactly five months later, we had the party. And it was a total blast. About 10 kids showed, not too many, not too few, and at least as many adults - including his wonderful teacher (who only lives half a mile away!). In addition to all the recycled items in our invention box, Brady's uncle brought a box load of stuff from Michaels.

For the first 20 minutes, the kids all ran around and flung, tossed or kicked any projectile toy they could find, and then they wandered one by one to the invention area. I wasn't sure any of them would invent, but they did! They loved it!

They got to sit on tarps and make whatever came to their minds with glue, tape, paint and boxes full of stuff. No restrictions, no worries. Some made things like pirate ships, magic wands and a "coconut launcher," one of my favorites, while others made simple items like facial hair out of foam - eye brows, goatees and beards - which they duct-taped to their faces! Ha!

We had beautiful weather and enjoyed just celebrating for the sake of celebrating with friends.

I asked Brady afterwards, "How does it feel to see your idea come to life." He smiled and said, "So awesome." I think so too. And he wants to make it an annual event.

Here are some pictures of the day.

-- The guys had to get balls and Frisbees out of trees about 392 times during the day. 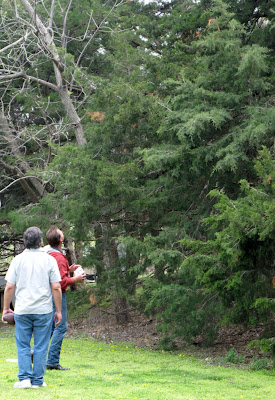 -- Eating snacks in the stick house on "plates" they invented from squares of foam. I love it! -- A friend's (also after-school teacher and mom of a kid in Brady's class) older child displaying the hit of the day - foam goatees (and mustaches) and eyebrows attached with duct tape! Brilliant! 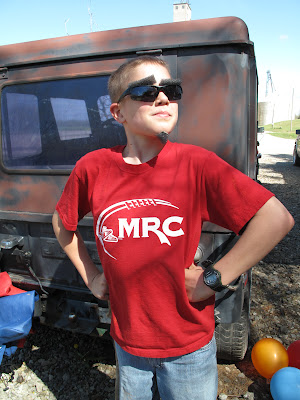 -- The invention area and all the kids rummaging through the boxes (Brady's wonderful teacher is in the background of the first one). 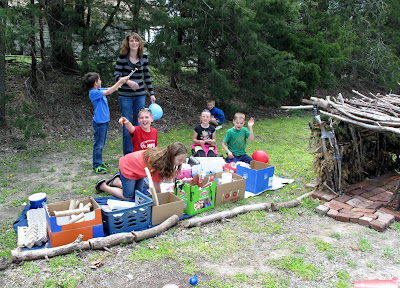 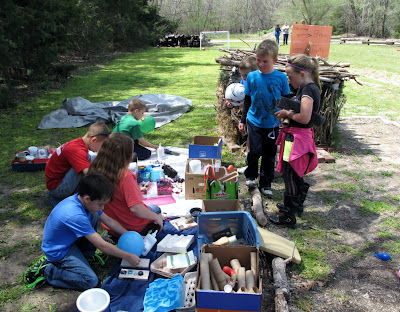 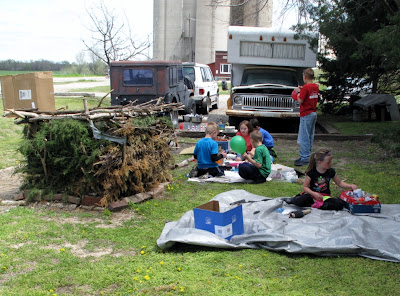 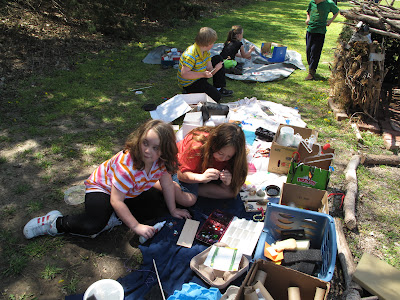