How I Got Here

So before I get into the things that have informed my life that I think might be helpful to others, I want to share how I got to this point. It's been a long, winding, complicated, roller coaster ride that went from Kansas to Florida to Utah back to Florida up to South Carolina back to Florida and back to Kansas. It involved working for county and federal government at times, a university for two years, as a cake decorator and journalist and now as the computer guru for a small family used car business. At times I was a stay at home mother, then an unemployed divorced mom and finally a working mom. It involved living on a barrier island, in apartments and finally owning a house.

But it all starts when I was 17 (24 years ago, how can that be!). That's how old I was when I first met my now-husband. I was dating a guy from his high school and we met at a party. We didn't meet again until we were 19, but we both remember our initial meeting all these years later. At 19, I became best friends with a classmate of Jason's and we met again, dated for four years, were engaged, but weren't quite ready for each other. I wanted to go out and see the world, follow my dreams, see what I could accomplish "out there," and he wanted to build a business and stay in the small town his family had inhabited for generations and where his parents, aunts, uncles, grandparents and extended family lived. We both had very noble but very different goals.

So I left, was blessed to do all the things I wanted: move around the country, meet interesting people, work as a journalist and an earth science researcher, have a beautiful child, and Jason was blessed to build a successful business, be there for his family and raise an adopted son into a wonderful young man. We both married and later divorced, and then at age 39 found each other on Facebook. I was in Florida, he was still in Kansas and within five minutes on the phone, we both knew all those old feelings were still there but we had pursued our separate paths, had learned and grown and mellowed, and were ready to make a life together. So that's what we did. When I was laid off from my job in Florida, he moved me, my son and my mother back to that small town we'd live in together 16 years before.

I was amazed to find that all of my experiences over those 16 years brought me to a place to appreciate this town I once felt trapped in. I'd gone through sprawl and traffic and crime and disconnectedness. The smallness and safety here now seemed like freedom rather than the prison I once imagined it to be. It now seemed like a perfect city in which to raise a child and pursue the things I believed in, like living off the land, living simply and frugally, eating locally and building relationships in a community. The town hadn't changed, but my perspective had.

All places - big, small and in between - have their beauty and benefits. I hope you are all lucky enough to find one that "fits" you and if it's not quite there yet, use gratitude and prayer and personal/life change to make it into what feeds your soul.

Happy Day After Thanksgiving! Thanks for being here. 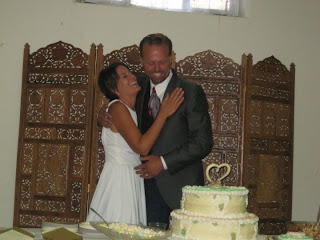